My Fabric Friday for April

As mentioned in this post I have set myself a mini challenge to try and wear at least one handmade item to work on Dress Down Friday which happens once a month.   I wore my Take two Jersey top to work today with jeans.  Here is a photo: 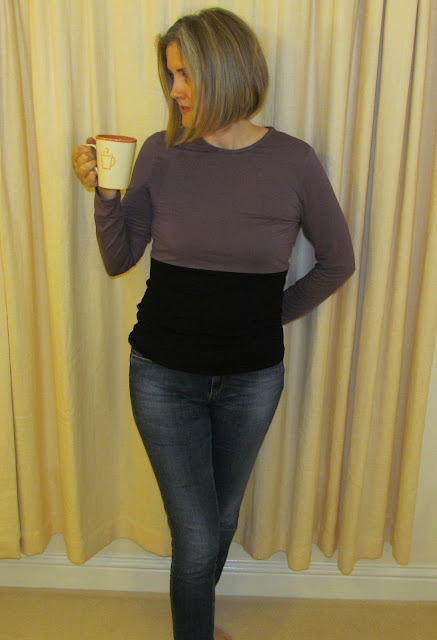 This is the first time I have worn it (other than trying it on or taking photos in it) and I have to say I love it.  It is the perfect top for jeans.  The material is so lovely and soft that I was finding it hard not to stroke the arms.  It was so comfortable.  It makes such a difference wearing a top or cardigan that actually covers all my arms and is a decent length.   I originally wondered if the two fabric colours might look a bit like "two bits of fabric sewn together just to use them up" (which of course it was).    Well I don't think so at all.  I think the black strip is cut just in the right place to add an interesting detail.

On to other news.   My Crescent skirt pattern has arrived and Tasia from Sewaholic has announced a Crescent Sew-a-long starting on 14 April 2011.  Hurrah! 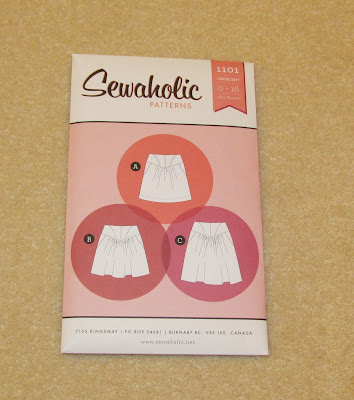 I was inspired by Angela Kane's beginner's knitting video here to try my hand at making a scarf.   I've even bought some knitting needles and wool: 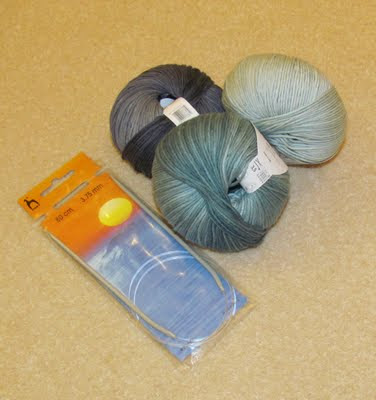 I have knitted before but I haven't knitted anything since about 1983.  I am able to pinpoint the year because the last thing I tried to knit was a jumper for my cousin's baby who was born in November 1982.  I got as far as the front panel!  Little Katie (named after me!) now has a baby of her own.

I read this hilarious post about a UFO (unfinished object) knitted scarf.  I am not expecting to fare much better than Portia but I'll have fun trying.

Happy sewing everyone.
Posted by Katy at 13:05