I have now finished the Peter Pan collar shift dress I have been working on.  Here are the pictures. 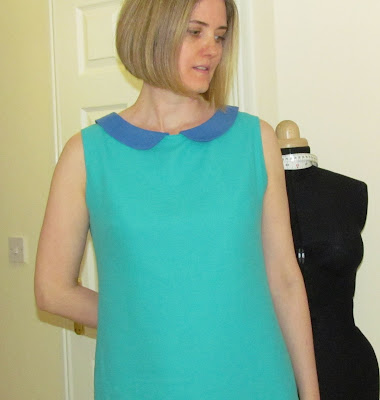 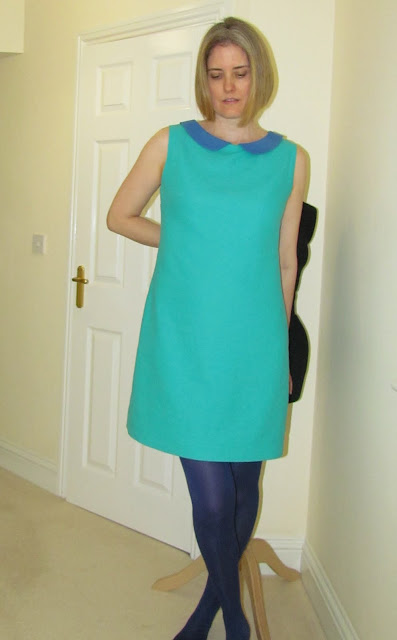 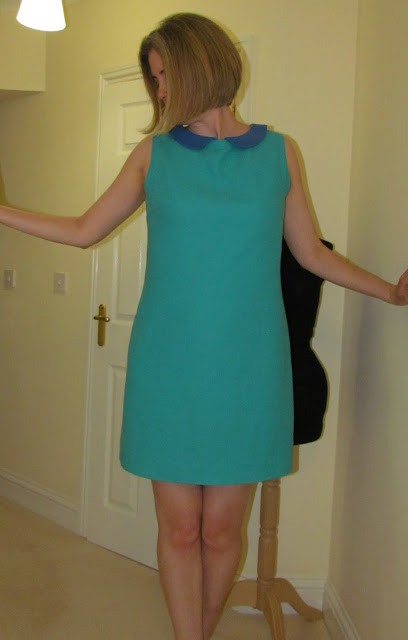 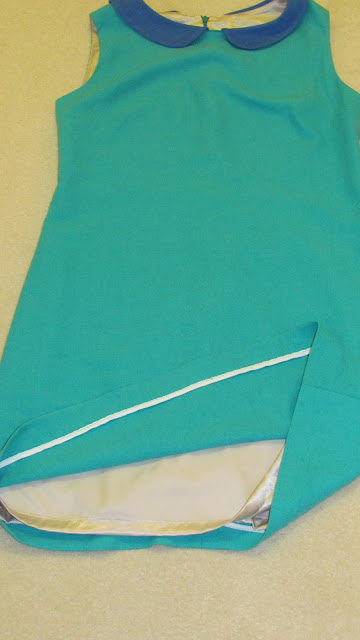 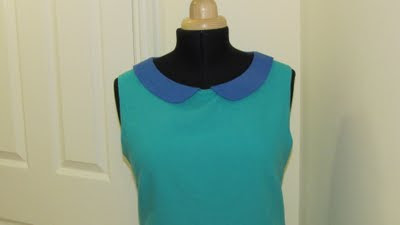 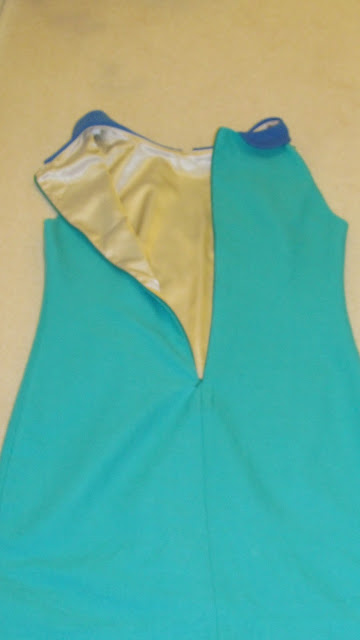 This is a fully lined shift dress using Angela Kane's shift dress pattern number 763 with a self-drafted Peter Pan collar.  I posted here about how I did the collar, how I attached it to a lined garment and the muslin / partial test garment.   I have made the dress before.  As explained before I made a number of adjustments to the pattern fit me.  My pattern pieces for the dress are the muslin itself!   I don't know why but this version is slightly bigger than the last one and I prefer the size of this one.  The back also came out better on this one - maybe because it is slightly bigger.

I used the jade linen and satin lining leftover from my Jade Crescent Skirt.   For the collar I took a gamble and used blue jersey knit, mainly because I love this particular shade of blue.  The jersey collar sewed up fine with no mishaps.

I hemmed with the blind hem foot as usual and it has come out invisible.  I decided to experiment with a nice hem finish.  I was inspired by the bound seam finish that Tasia of Sewaholic patterns used in the Lonsdale sewalong.  I used the same principle to finish the raw edge of the hem instead of my usual zig-zag stitch (see the fourth picture above).  I folded white twill tape in half and pressed.  I then sewed the twill tape onto the edge and then machine hemmed as usual with the blind hem foot.  It was easy.  I think you need to have the right fabric to do this, something with body.  This is lined linen so it can take the twill tape finish without showing on the right side.   Maybe for a lighter fabric a ribbon would be better (another hem finishing suggestion from Tasia).  It would have been nice to have twill tape to match the colour of the dress but I have just bought a load of white twill tape which I need to use.  You can't see it on the right side anyway and it still looks nice on the wrong side.  A same colour twill tape would have been nice as the green cotton from the hem shows on the white twill tape.

I used an invisible zipper which, unlike my blind hems, has not come out invisible.  I must get around to practicing this technique more.

When I finished the garment, the gap in the front between the two collar pieces was closing in slightly. The collar sections are quite heavy and the middle section had no reinforcement apart from the lining.  I should have put some interfacing there but it was too late by now.  I then hit upon the idea of putting twill tape on the (trimmed) seam allowance in that little section in the middle.  I cut out 2 little pieces of twill tape the same size as the gap and sewed them onto the seam allowance on top of each other.  This instantly strengthened the middle section!  I love how I can now solve problems with the techniques I have learned along the way.

I am really pleased with the dress.  It's so comfortable.  It can be worn as a summer dress (slightly warm with the lining) or a winter dress with tights and a cardigan.  The royal blue tights in the second photo are the only ones I have that go with the dress.  The cranberry and plum coloured tights I have don't go at all - maybe because of the blue collar.    Maybe some natural tights with a slight shimmer?