Finished Scarf ... and a Re-Fashion

I've finished my first ever knitted scarf and in fact my first knitted anything since about 1983!  Here it is: 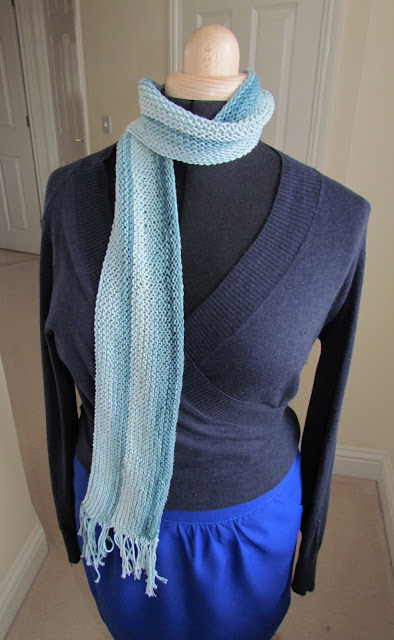 It's taken a long time.   As I mentioned in this post in April I was inspired by Angela Kane's knitting video here to try some knitting.  It's a great video if you haven't seen it.  She experiments with different yarns, some of which I didn't know existed - like the big chunky one.   I casted on on 2 April 2011 and was on and off with it for the next few months.  I stalled when I noticed I had dropped a stitch.   I finally took it with me to my mum's a couple of weeks ago and she kindly fixed it.  I know there are videos on this sort of thing and I would like to get round one day to going through them and learning a bit more.

I used circular needles (3.75 mm), cast on 200 stitches and knitted 40 rows.  I used Fashion Iro yarn, made in Italy, which is 100% cotton.  The yarn has different shades of blue in it, so it's a bit like making a stripey scarf without having to change yarn.

I don't usually wear scarfs because the ready to wear ones annoy me - itching the neck, sliding off and the like.   This one's great though and I've worn it every day to work since I finished it.   I've already started making a second one in the same style. I casted on yesterday and have done about 9 rows.  I'm taking a bit more care on this one.

I've also had my first go at a re-fashion. I'm not sure if what I did justifies this label but it transformed a wrap top into something I now like wearing.

I bought this blue wrap top from H&M about 2-3 years ago.   I wore it quite a lot of before I made my Burda wrap top. Since then I haven't worn it as I prefer my wraps to finish more or less at the waist rather than at the hip.

I've got a "before" photo of sorts as I have the same top in black which I have yet to alter. Anyway, all I did was cut off the ribbed edge turned it under a couple of times and stitched it in place. I was delighted with the result and love wearing it. Here are the photos - the first is the "before" photo. See how it now finishes much higher than the "before" one?


My tape measure always gets used as a necklace on my dress form!

Other news - I was interested to read this article about the Commons' speaker's wife, Sally Bercow. She wrote a nasty tweet about the Channel 4 programme "Kirstie's Handmade Christmas".   Accordingly to Sally crafters like Kirstie have too much time on their hands, are condescending, too good to be true and middle class.   Wow - what an ignorant attitude is all I'll say.