It was supposed to be a top this time as I've been making loads of skirts recently.   Unfortunately I abandoned the top I was making at the muslin stage (more on that another time).   My gain though as I have another rather nice skirt.  Here are the pictures. 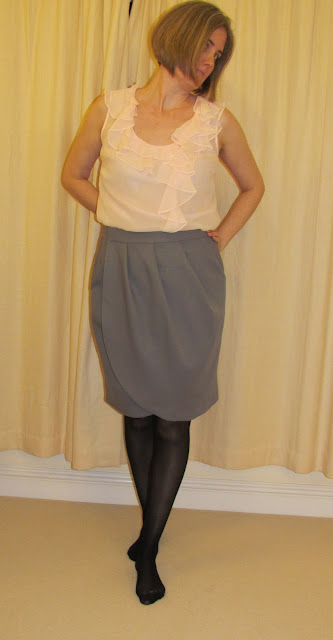 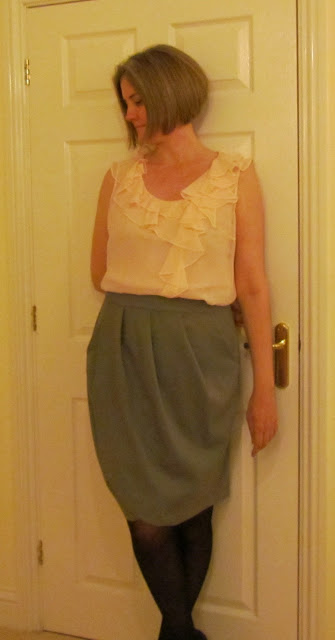 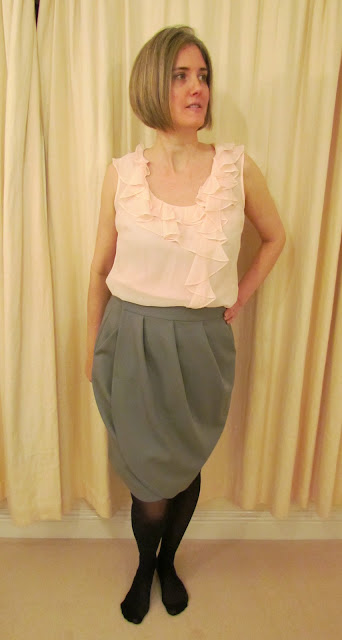 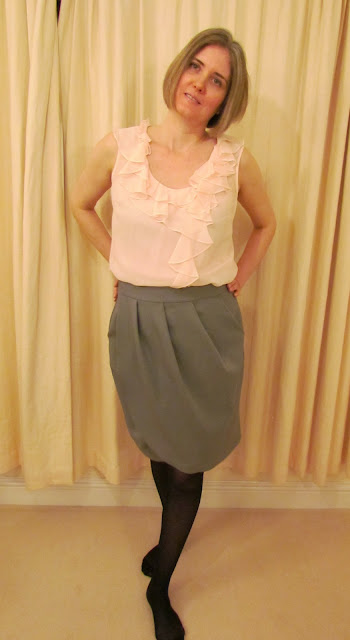 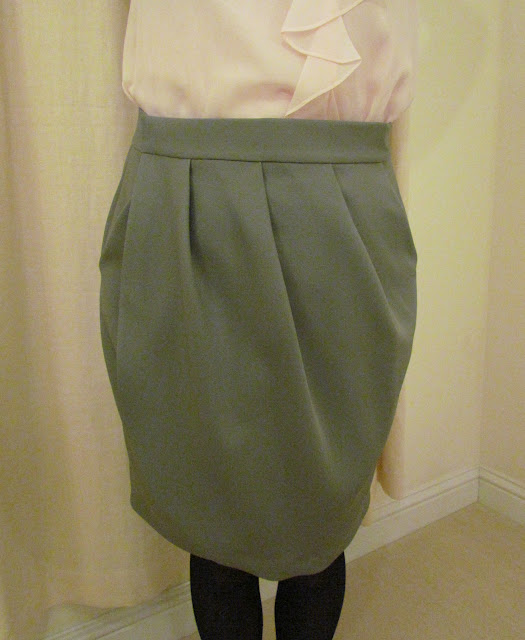 I used the Petal Skirt pattern from Papercut patterns. I actually got the pattern for free from the designer, Katie Brown, which I was delighted about. I gave Katie some feedback on the circle cardigan top I made from her range. It turned out one of the pattern pieces was wrong so she gave me a replacement pattern together with this one!

The skirt is fairly long for me as I usually go for shorter skirts. The fabric is part of the lot I bought from the retired seamstress. As usual I don't know what it is but it's quite soft and drapey.  The fabric is grey - a mushroom-y type colour. There was only the tiniest piece left so I did some creative squashing to fit all the pieces on.  I didn't have enough to do the hem facings so I used another beige fabric. I didn't have enough to do the waistband as one so there's a seam at the back.

The skirt front panels have only two pleats towards the outer edge.  I made up a muslin.  Although it looked fine I decided to make two changes. I felt this left the skirt a bit bare towards the side seams.   I added a slash pockets using my Crescent skirt pocket pattern piece.

I also added a third pleat in the gap.  I loosely followed this tutorial from Megan Nielsen.  Megan makes a tulip skirt from a pencil skirt pattern but I used the basic principle to create another pleat. I started by tracing a new pattern piece.  I then slashed down to the side starting from the end of the last pleat. I spread the pattern piece and put another piece of tissue behind to fill the gap. I made the slash wide enough to duplicate the space required to create another pleat.  I mirrored the pattern edge shape of one of the existing pleats in the space just created. I taped the tissue in place and then traced out a clean copy rather than use the one with tape all over it.  (I'm a bit more patient with this now. There was a time when I would have made do with a taped one but I know they don't store very well and end up sticking to other pattern pieces).

This was my first time using a hem facing.  It's a nice technique but somehow it ended up being a bit too big and didn't line up at the seams very well.  Instead of topstitching the facing down like the pattern suggests, I zig-zagged the edge and blind stitched the hem in place using the blind hem foot.  It came out pretty invisible from the right side.

I fully lined the skirt.  Instead of using the pleated pattern pieces for lining I created a new pattern piece by closing up the pleats and tracing it.

I finished this last weekend and was disappointed with parts of it.  The fabric and interfacing I used for the hem facing was a bit stiff.  The pleated section on the underlay panel caused weird creases in the side of the skirt.

So the skirt sat on the dress form for a week and somehow it now hangs far better. Another plus is that it goes with this ready-to-wear blouse that I bought in the summer of 2010 (before sewing took hold).

All in all I'm pleased with how the skirt has turned out.  The colour in particular is so versatile and goes with lots of things, particularly different coloured tights.

I can't believe it's only a week until Christmas!  I have from Thursday next week off work until the New Year!   I can't wait!