I now have the Burdastyle sewing handbook! This is all the more special because I won it in the Burdastyle Day 29 giveaway! The question was about sewing plans for the new year.  I said I would make the Macaron dress, the Minoru jacket and a pencil skirt.
I wasn't expecting to win at all and in fact this was the only December giveaway I entered. I got an email from Burdastyle on 2 January and I replied straightaway with my address. When the book hadn't arrived by the end of January I sent an email.  This did the trick because the book arrived yesterday.  Maybe it's bad form to chase a giveaway prize but because it was Burdastyle I thought a nudge wouldn't hurt.
Here's the lovely book: 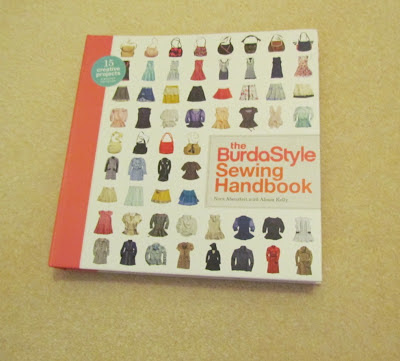 I debated about ordering this one when it came out last November.  I wasn't sure about some of the patterns and I felt the Colette patterns were more me. As it turned out I didn't have to order it! I spent the gloriously sunny (but cold) morning yesterday reading through the book.  It's a wonderful book and I would totally recommend it.  It was fun looking at the member variations and seeing who I recognised from the site!
I like the skirt and the dress patterns.  Here's the skirt: An underskirt and an overlay with a cute scallop hem.  Perfect for the summer. 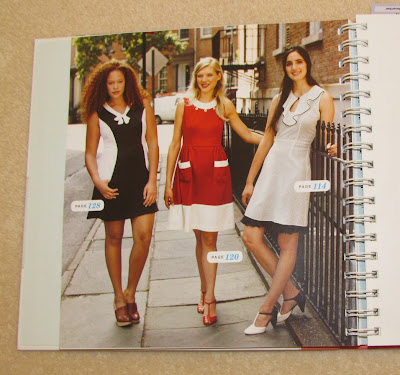 The dress (the white one on the right) is an under dress with an overlay.  Ruffly necklines aren't usually my thing but I might try this one.  I also love Casey's variation - the red sailor dress in the middle.

The coat is nice as well but a bit advanced for me at the moment.  I'm not keen on the blouse.  A bit too much material going on for me.  I would only consider making it into a dress. I'm not interested in sewing a bag but they're fun to look at.

Look what else they threw in: There's a measurements chart, some Mettler thread, a pen and a Burdastyle badge (with a picture of a button on). I usually use Gutterman thread.  I grabbed one of the Mettlers when I run out of black today and noticed it was much thinner than Gutterman.  I decided not to use it.  Maybe the finer thread is for use with finer fabric.

I'm delighted with my prize and I'm looking forward to making up some of the patterns.