I have now been sewing as a hobby for around 18 months since I re-discovered my sewing machine in August 2010. The journey from pincushion to Macaron has been filled with learning, sewing, buying fabric and equipment and much more. These pictures may illustrate how far I have come. Here is a recent make – the Macaron dress: 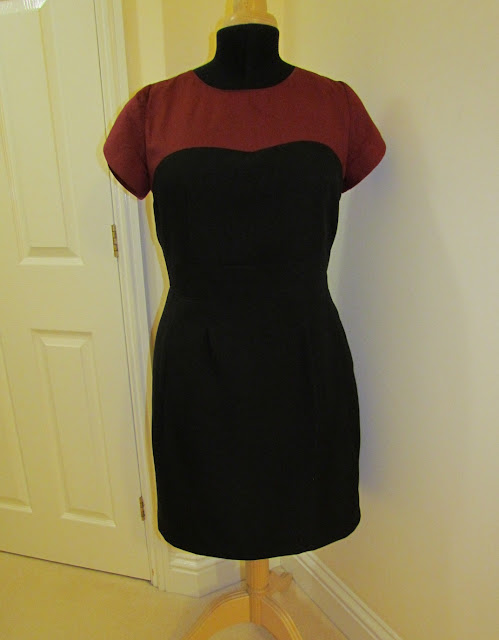 Here is the pincushion I made out of an old shirt just after re-discovering my sewing machine: 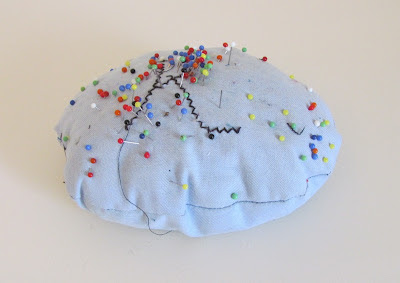 I even embroidered a “K” with a zig zag stitch! Yes I have the skills to make a better pin cushion now but I like this one. I like the size and is a reminder of how far I have come.
At some point along the way I settled into a routine of how I like to do things, often after some trial and error. I'm learning new things all the time and trying out new things that end up being part of my routine.
I thought it would be interesting to take stock of where my sewing methods have settled at this point. I've learned there is no “right” way to do things. There are often several ways and it's a matter of trying out new things and using the ones you like. We're also creatures of habit and, like having the same current account for years on end, once you find a method that works you may not see the need to change it.
Equipment and storage
I have two builders' tool caddies, a small and large one to store everything. They are canvas ones bought from a DIY store. My smaller caddy lives on my sewing table and has the core items I use the most:
If you're a beginner I would say this is pretty much all the equipment you need to get started apart from the sewing machine. I invested in a decent ironing board and steam iron some time last year. Well I thought the ironing board was decent being Brabantia but it has broken and been replaced 3 times and has just broken again. The problem may be that it is not sturdy enough to take a heavy steam iron on the ledge.
My bigger caddy carries most of my other supplies. It lives on a shelf as I don't need to access it that often. This carries my thread, which I store in an 38 cm organiser bought from a DIY store:
Here's a picture: 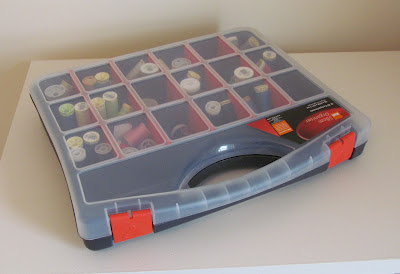 This is a great way to store thread. It holds a lot and you can sort it by colour. The plastic case is slim and easy to store.
Apart from the thread, the most used items in this caddy are:
This caddy also contains items I bought after picking up internet tips. They're not essential and I wouldn't miss them if they weren't there:
The hammer is used for flattening bulky seams, such as the tops of a zip on a dress or waistband. I don't always use it and I'm not sure how effective it is. It's probably a better (and safer!) to reduce bulk by clever trimming.
I bought the chisel set as I read they were good for cutting open button holes, used with the hammer. I haven't done buttonholes on a garment but I have done a few practice ones. I think I would use the same method as I use for slitting open a welt pocket. I fold in half the area I want to cut and snip into the middle with the tip of my fabric scissors. I then carefully cut open the slit using the tips of my fabric scissors again.
The wooden boards I use for the hammer to avoid damaging my table. I used to use the small chopping board for pressing before I got the clapperboard. A false economy and the clapperboard is much better.
The caddy also has some white and back shop brought bias tape. I used the black on some of my earlier garments but I think it's stiff. I think it's better to make your own bias tape. It's still useful to have it on hand for use on the right garment.
I also have a Phillips screwdriver. I'm struggling to remember why I bought it. I think I needed it to attach the invisible zipper foot I bought. I never use the invisible zipper foot so I never use the screwdriver. I use a normal zipper foot for my invisible zips and they work just as well, if you go slowly, hold open the zipper teeth and stitch close to the teeth.
I also have a tracing wheel and sticky coloured tracing paper. I thought this would be a quick method for transferring markings but I have to say I hate the method and never use these items. The sticky tracing paper is rubbish, doesn't show up and I don't think it's an accurate way to mark. I usually take the time to do tailor's tacks. Sometimes, and only if I know I can do it accurately and without the fabric moving, I will stick a pin in where the mark is, lift up the tracing paper and chalk against the bottom of the pin.
Cutting, tracing and storing patterns
I never cut into the pattern tissue. This is mainly to preserve the pattern in case you want to later cut a different size. I use Burda tracing paper and a felt tip pen to go over the lines I want to trace to make the tracing process easier. I store my traced patterns in clear plastic wallets with a label for each pattern. Here is a picture: 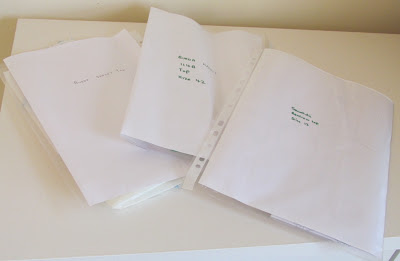 I store my original and traced patterns and my tracing paper in 2 old laptop bags at the moment. They are now bulging at the seams and I need a better solution for them.
Until last week I used trusted cans of tomatoes as pattern weights. Pattern weights are expensive so I tried to find fender washers in Wickes last Saturday (a large DIY chain). I have no idea what fender washers are as I've only read about them on sewing blogs. I looked at the plumbing section and couldn't see anything. I was too embarrassed to ask someone just in case they asked what they were or what I needed them for! I proceeded to look around to entire store to find something suitable. The only thing I found was this set of 10 kitchen cupboard handles which I bought for around £14: 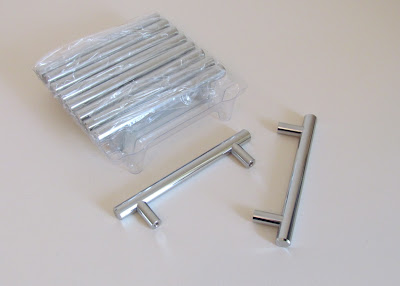 I used them to cut out some Renfrew top cuffs yesterday and they were fine. I think a fender washer may give a flatter result when holding down the paper but they're fine. I've kept the little tray that the handles came in so it can sit on my sewing table. I've also kept the handles in their little plastic bags to make them easier to pull them out of the tray!
I don't pin pattern pieces to fabric before cutting. I have settled on the following method for cutting:
Other items in my sewing area are:
I use the tailor's ham all the time for pressing anything other than straight seams. The sleeve board is good for, well sleeves, and for getting into the corners of lined or faced skirts and dresses near the top of the zips and into shoulders.
The metre rule I use mainly to help fold fabric along the grainline and then to measure from the selvedge (if I have one). The curved ruler is great for altering patterns and drawing in new pattern outlines.
I have a dress form. I haven't yet used it for altering as I tend to alter when I'm wearing the garment as my dress form isn't quite the same size as me. I nearly always have a finished, or a partially finished make, on my dress form.
Muslin
I have made a muslin for every project since last June. Before this I was unsure and thought it was too advanced for me. My first muslin was for the Crescent skirt so I followed Tasia's sew-along post on the subject.
I'm always surprised to hear people say they hate doing muslins and that it takes the fun out of sewing. The main reason I love muslins is the speed with which you can have a made-up garment to try on. One of the best parts of sewing is trying something on for the first time and smiling when you realise it could be a winner! I use a size 3.5 to 4 stitch on my muslins and don't finish off the ends.
I agree that the altering stage is not much fun, except when you realise you don't need to make any alterations or the first round of alterations you make come out fine. Once I get to the second or third muslin I tend to lose the will a bit and sometimes end up settling with how it is rather than continuing to get it perfect. Each muslin takes a lot of time to alter, trace out new pieces and re-cut. I entirely agree that this can take the fun out of sewing. The flip side is that you will have only wasted muslin fabric in the process rather than nice fabric.
Construction
I'm a “pin and baste” girl in that I will always pin and hand baste before I sew the final seam. I used to remove the pins after hand basting but I prefer having the pins there as well. I don't sew over pins and remove them just before I reach them. I sew fairly slowly and have the speed on half setting. I press all seams as I go along and now use the “press flat and then open” method. I also finish and tie off loose ends as I go along.
It's been interesting to take stock of the methods and equipment I have settled on at this stage of my sewing hobby. What has surprised me is how much I have varied the sewing process to suit me. I am usually one to do things “by the book” such as following a recipe. It just goes to show that you can vary these things to suit you if you wish and there is no “right” way to do things if what you do works. Equally sewing is a learning process. If something interests you, then you can try and if you like it, you can use it.
I just have the cuffs to do on my second Renfrew top this weekend and then I really must get around to making my mother's pencil skirt muslin!
Happy sewing.
Posted by Katy at 07:20