I've finished my Darling Ranges dress! I'm so chuffed to have one of my own. Here are the photos. 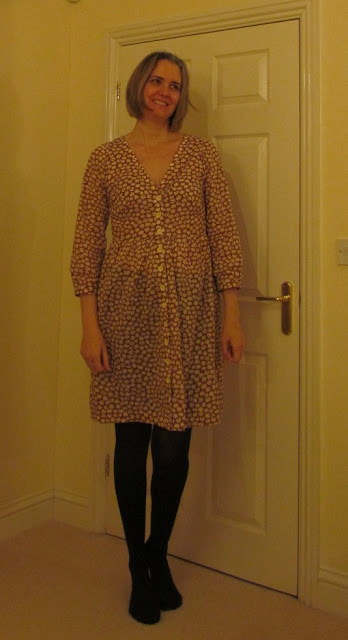 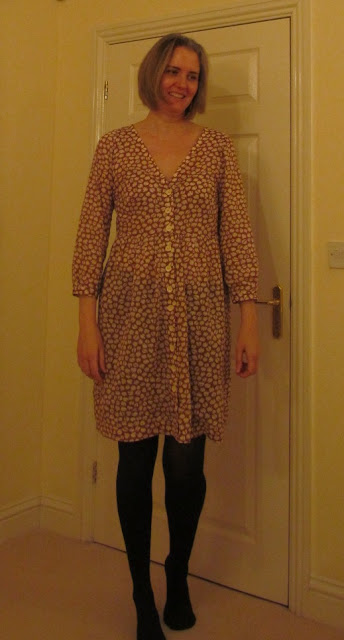 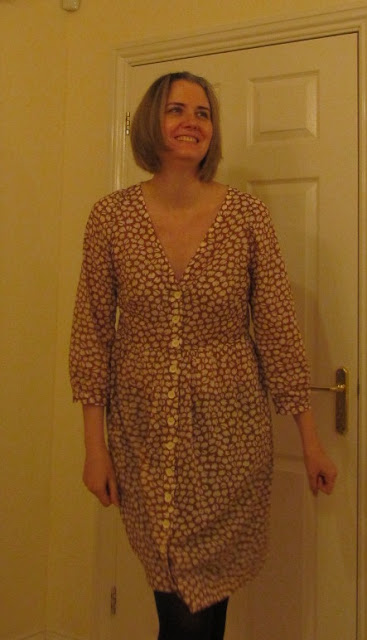 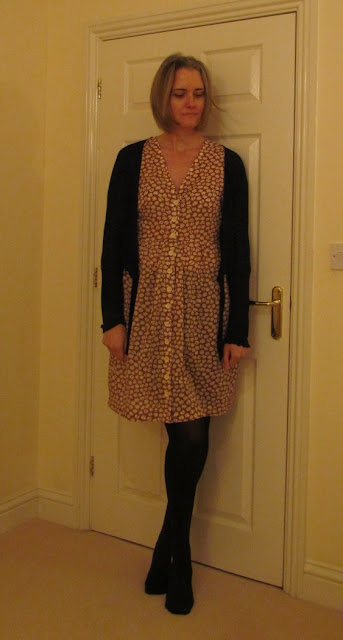 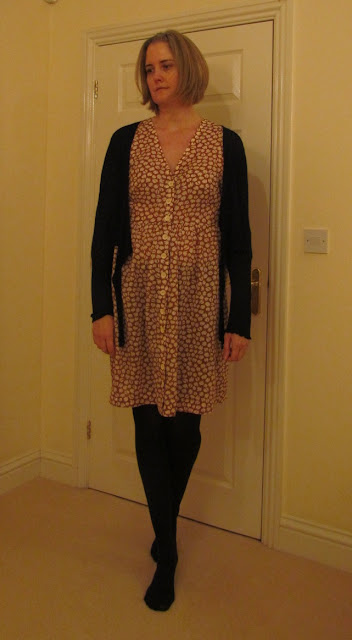 The best part? Being able to pair it with a brightly coloured cardigan.

This is the Darling Ranges dress from Megan Nielsen. I didn't buy the pattern for ages as I thought the “v” neckline would be too low and wrong for my shape. I caved in a few months ago when Megan had a discount. I ended up buying it from a UK supplier as it worked out cheaper.

I made two muslins. The first muslin I posted about here. I cut a medium but found the bodice a bit tight and the dart too high. I debated whether to cut a bigger size or adjust the pattern. In the end I cut a bigger size.

I cut an extra large and figured I would fit it down to size. I used a 1 cm seam allowance throughout instead of 1.5 cm as the pattern recommends. This is getting to be standard for me – mainly to try and avoid lengthening the bodice and widening the shoulders.

1.  I lowered the bust dart by around 1.5 cm. In my last post I mentioned that I would need to alter the shoulders as well to achieve this. I'm grateful to Johanna for diplomatically questioning what on earth I was talking about. In my head I had a crazy way of doing it but luckily I found Megan had a much better way covered in the Banksia sew along. The Darling Ranges dart is much bigger than the Banksia one so I found this a bit tricky to do.

2.  I did a small bust adjustment on my adjusted bodice piece – my first ever. I've put up with a baggy bodice in the past to avoid this. Not an option on this style of dress. I took something like 5 cm out. I used Megan's tutorial for this on her sew-along post. I couldn't follow all the steps on the post, particularly the ones towards the end. It took a lot of of effort to get the waist size to stay the same and the sides to match with the back bodice. I didn't quite manage to get the side seams to match. I only noticed this when I was sewing the final version. I eased the fabric above the dart to make the side seams match creating a sort of ruched effect.

3.  I lengthened the skirt pieces by 3 inches. The skirt is pretty short in its unaltered form.

4.  I lengthened the sleeves by 3 inches so they're three quarter length. I shaved 2 cm from the sides of the sleeve pattern piece at the base, tapering up to 1 cm shaved off at the top. I might shave off a bit more if I make this again to get a more fitted sleeve.

5.  Waistline – I didn't change the height of the waistline. It's higher than the natural waistline but it's supposed to be.

6.  I removed 1 cm from the sides from my skirt and bodice pattern pieces.

I sewed the dress up in a different order to the pattern after hearing others rave about the method. I attached the skirt and bodice pieces separately into three long panels and did the side side seams in one fell swoop. This makes it easier to make minor adjustments to the fit (which I didn't need).  This meant I gathered the skirt pieces in three sections rather than in one go as in the pattern.

I didn't like the elasticated sleeves on the muslin so I decided to make cuffs. I was going to try a buttoned cuff but I wasn't up to trying a new technique. My cuff pieces measure 10 inches x 2 inches plus seam allowances on all sides. Those of you with the Renfrew or Minoru patterns will know how to attach cuffs. I linked to a tutorial on how to attach cuffs in my hoody post from last year. Instead of gathering the bottom of the sleeve to fit the cuff I made four pleats. This was really easy to do:

1.  After sewing the cuff seam and folding and pressing (wrong sides together), mark 4 notches on raw edges of the folded cuff at equal distances starting from the cuff seam. The first notch is at the cuff seam.

2.  Mark 4 notches in the same manner at the bottom of the sleeve (with the first notch at the sleeve seam).

3.  Match the first notches together at the sleeve and cuff seams, right sides together, pin and then do the same for the remaining notches (see the tutorial linked above as to what it should look like at this stage if you're unclear).

4.  Pin the 4 parts in between the notches and create a pleat in the centre of each part. It doesn't matter which direction you pleat, or whether you have two going one way and two going the other, as long as they're consistent.

5.  Here's an illustration of one pleat: 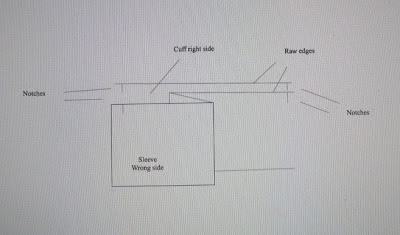 I used a very thin cotton. I love the fabric that Megan used in her sample and this is the closest I could find. Unfortunately it's very see through so I'll have to make a slip at some point.

I used interfacing on the button placket which is not mentioned in the pattern. I used shop bought bias tape for the neckline, as recommended in the pattern. I haven't used this stuff since my early days of sewing. It has an unfair reputation for being stiff but really there's nothing wrong with it. I might start using it more often.

I did 12 buttons instead of 10 using the placement tips I've written up in my techniques section tabbed above (taken from my Vogue book). More buttonhole tips here if you're interested. My buttons measured 1.7 cm in diameter, were 2 mm in diameter, so my buttonhole length was 2.1 cm. This was my first time doing vertical buttonholes on a placket, which are slightly easier to place than horizontal ones. I thread traced the buttonhole placements this time, in a capital “I” shape but extending all the thread traced lines out so they can be seen and used as a guide when the presser foot is down. This would be much easier if I was brave enough to use a wash away marker.

I did the right hand column of the buttonhole first this time, rather than the left, as suggested in my machine's manual. This makes it SO much easier as your thread tails hang behind as you would normally sew.

I've done quite a few buttoned garments now but each time I've done about 3 test runs on a scrap of fabric. If nothing else I need to establish where the work needs to be placed to get the buttonhole stitches on either side of the thread traced centre.

I still use my own tip of going over the buttonhole stitching again after slitting the buttonhole open. This has always worked well for me, even on the fine fabric in this case.

I machine-sewed on the buttons (which I write more about here).

Although my top button is very secure, there's a bit of flipping back going on over that top button when it's worn. A popper (or a good old safety pin) might be in order.

I did a 2.5 inch hem as recommended in the pattern. I did it slightly differently to the pattern which has you fold under half an inch before hemming 2 inches. I like a bit of body in my hems so instead of using interfacing I folded under 1.25 inches, pressed and repeated. Instead of doing one row of stitching as in the pattern I used the trusted blind hem stitch on my machine.

Thoughts on the shoulder seams and sleeves

The shoulders are very narrow on this pattern. The pattern is not graded in this area so it's the same whether you're a small or large. I know some people have increased the width of the shoulders. By sewing with a 1 cm seam allowance I effectively added 1 cm to the pattern design. I was expecting the sleeves to be too tight but I found them to be fine with a good amount of ease in the sleeve cap. Apart from the adjustments I made to the sleeve length and side seams, I found I didn't need any more adjustments.

Thoughts on the bodice dart

I'm not entirely happy with the darts. They're not graded on the pattern so they're the same for every size. As I'm tall I had no issue with the dart being too high - that's easy to adjust. It was the size of the dart that I found odd. They produce a conical shape. I have reduced this effect as much as I can by fitting it to my shape. There's still a bit of pointi-ness but nothing noticeable because of the drape of the fabric. I would be worried about doing this in a stiffer fabric, which is a shame as I've seen some nice denim versions of this dress.

I decided to add the ties in the end. I think most people leave them off and use a belt. I've tried this dress with a belt and it just looks wrong – probably because of the high waistline. I'm not a great one for belts on dresses anyway. I find them annoying as they move about. I was going to omit the ties as it really looked fine without. I decided to add them so I would have the option of a more fitted waist if I wanted.

I ended up attaching the ties much closer together at the back than the pattern suggests. The ties are tiny. I thought for a minute I must have forgotten to cut them on the fold, but no they're meant to be small. They're too small for me to tie into a bow so I've tied a knot. If you want them to tie into a bow then you'll have to make them much bigger.

I didn't do the pockets.  As the fabric is quite thin I didn't want the pockets to interfere with the lines of the fabric and pattern. There was also an element of laziness as I have done a lot of fiddling with this pattern.  I'm really missing the pockets though. I have to remember this before omitting them next time!

Despite the few hiccups I've had along the way I love the dress. I was determined to stick with it and I'm glad I did. In fact I've nearly finished a second one which I'll be posting soon! I have the Banksia pattern as well and I'm looking forward to that. I'm also thinking about a Banksia dress.