Florence and Fred Rub Off

Hello everyone! I still owe you two skirts but it's flipping freezing around here so not much progress on the photo front. Instead I thought I would do a work in progress update on my latest project. It's taken a lot of time and effort so far so a progress post is rather apt.

I don't know if I've mentioned before but I have a really well fitting ready to wear dress that I've been planning to copy. I first started thinking about this when Karen from Did You Make That copied a ready to wear skirt she owns (see her post here). After finishing my slip, rather than making yet another garment from a pattern that would take endless muslins to get right, I thought I would turn my hand to this project for a change of scenery. The result so far has been endless muslins to get right. Hmm sounds familiar. Anyway I'm pleased with it so far so let's start at the beginning.

The national supermarket chain, Tesco, has a pretty good budget clothing line called F&F, or Florence & Fred as it used to be known. In about 2008 (way before I started sewing again) I bought this green dress, on sale for about £10: 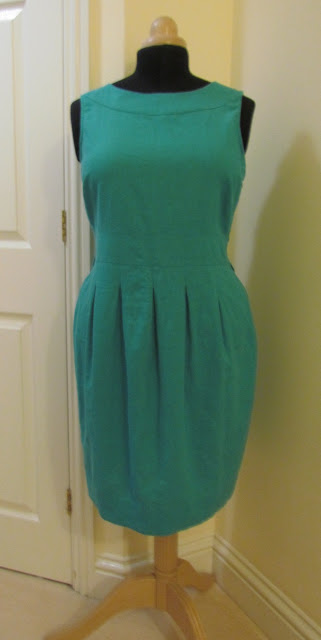 You're probably expecting me to say I've worn it non-stop ever since. Not so. I can hardly believe it now but this thing didn't fit (I bought it without trying it on). I couldn't do it up so it was flung to the bottom of my wardrobe ready to throw away at some point. Luckily I didn't throw it away and I happened to try it on last year. I was blown away at how nice this cheap old thing looked! I recalled it being a plainer shift dress, but look at all those details – the neck band, the waist band, the skirt pleats. (Interesting – perhaps it's only sewers that notice details like this). Above all I loved the fit, especially the bodice.

One of my favourite bloggers, Roisin of Dolly Clackett did a lovely version of a Bernie Dexter dress she had seen (see here post here). There were some interesting comments to her post. Even though Roisin used a commercial pattern an anonymous commenter complained about ripping off the designs of small businesses, copyright and the like.

I don't know what the legal implications are. I figure I'm OK because I'm not trying to sell the dress or pass the design off as my own. I'm just doing this for fun, a hobby and to see if I can achieve the amazing fit the dress gives me. (Amazing fit is something I've yet to achieve with a commercial pattern). I can see that if enough people like me, Roisin and Karen copied ready to wear then the designers may have grounds to complain. However I don't think there are enough of us bothering to do this to have any effect. They are interested in those unscrupulous enough to make a gain at the expense of their designs, which is not what I and other home sewers are about.

After some internet reading into the rub-off method (see this post for example) I set about tracing the dress. Here are a couple of pictures of my rub-off in progress. I will put at the end of this post all the pictures I took of the rub-off process. 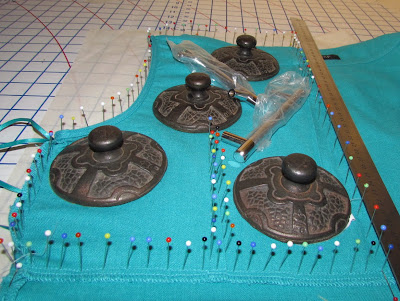 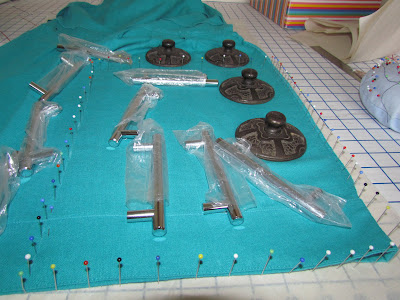 I love those vintage paper weights my chap bought me last year at an auction.  Yes my other pattern weights are kitchen door handles. I couldn't find large washers.

As you can see I did a pretty thorough job of pinning the outline of the garment to my tracing paper (which is underneath the garment in my pictures. I have a cardboard grid on my table so I was able to pin through to that.) In my mind this was going to produce a really neat and accurate pattern. Then I remembered darts had to be added. This is when I started to get a bit lost and go a bit mad. Calm down and focus I thought. All I need to do is slash and spread. Yeah - easier said than done getting it all to go  flat to produce a flat pattern piece (when you slash and spread your pattern does not stay flat!). Many hours later I managed to arrive at something that resembled a flat pattern piece but to be honest it involved a lot of guess and eye work rather than the result of technical skill. If anyone knows how to do this or can provide a link this would be good.

Anyway the long and short of it is that for all my effort with the pins and rub-off, I probably ended up re-drafting the whole thing again (maybe several times over) with the help of my curved ruler, adding bits on here and taking away there.

Although I've ended up with a pretty good pattern I'm slightly disappointed I haven't achieved this by doing it “properly”. You know, measuring and stuff, like an engineer would do when designing, say, a bridge. Anyway I guess there is a lot more to it than I thought.

Sunni at A Fashionable Stitch is working on an interesting project called Pattern Play where she plans to design her own garments from a basic pattern. She has given several suggestions for getting the basic pattern, including a sloper, a basic sewing pattern and even the rub-off method. I felt less bad about my pattern drafting efforts after reading her post. She too has found it difficult to draft a basic pattern from scratch.

Anyway who cares about my less than professional pattern-drafting skills because it has produced a pattern that I'm really pleased with. I'm hopefully 90% there. Here's the latest muslin.

I've lost count of the number of muslins I've done. I think this is muslin number 4, but it's probably more like number 5. Just before this one I did a half muslin of just the bodice and waistband. I was tempted to move to the final garment after the half muslin and making my changes to the bodice but I'm so glad I didn't. I've made what I hope are the final adjustments to my pattern pieces which were:
Even though it is tempting to just move onto the final garment I think I will make another muslin. You never know if the adjustments you have made will throw off the fit so I think it's better to be safe. Please pray with me that this will be the final muslin!

Anyway I hope you have found this interesting. The whole process has been an eye opener and learning curve for me. I'll finish with the rest of the photos from the rub-off.