Good evening all. I'm a bit behind with photographing finished makes. I have not one but two versions of the Florence and Fred rub-off dress to show you. They're great and I've worn them quite a bit. They're now ironed once again waiting to be photographed.

In the meantime I thought I'd talk about the progress of my current make - my second Minoru jacket. I think you know how much I loved my first version. I always knew I wanted to make a second one. The advantage of having worn the jacket for eight months is that I know what changes to make for the next version!

First up is warmth. 99.9% of the time it is cold in the UK. I may have exaggerated that figure but that's what it feels like! It would be nice to have a Minoru that kept me warmer on really cold days.

I realise this jacket isn't really designed for warmth like, say, a winter coat. Tasia (the designer from Sewaholic) has mentioned the fabric shouldn't be too thick as it has to gather at the neck and waist. I'm using the same fabric as in my first version, a fairly thick cotton canvas. To add warmth I looked into interlining the jacket.

I read a bit about interfacing jackets. The texts I read were aimed more at suit jackets where the interfacing would add structure. I don't think there's a right and wrong way about where to interface. Things like collars, pocket flaps and button bands are always interfaced. In addition to these areas, some people interface just the jacket front pieces while others interface the back as well, or at least the upper part of the back. I read that sleeves are rarely interfaced except for the top part of the sleeve cap, extending down to around 2 cm below the under arm. See this link to Claire Shaeffer's Couture Techniques book on Google books which talks about interfacing the sleeve. I followed this except I didn't cut the interfacing on the bias.

I used a medium weight sew-in interfacing on the jacket fronts, jacket back, the sleeve caps (extending to about 2 cm below the under arm points) and the collar pieces. For the lower part of the sleeves I used a white cotton (as I couldn't find any batiste). Here are some pictures of the finished pieces. Yes it took me ages to sew all those lines onto my pieces! This step also ate up a whole spool of thread, so I'll have to buy more! I have no idea if this experiment with interfacing will work but I guess you don't know until you try! 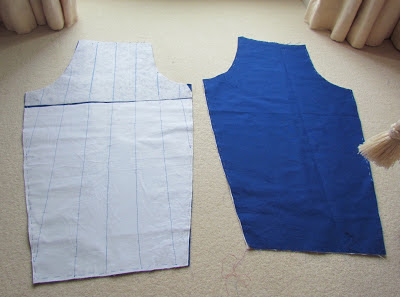 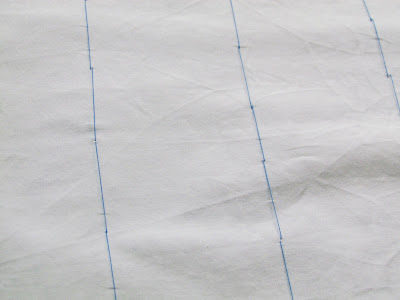 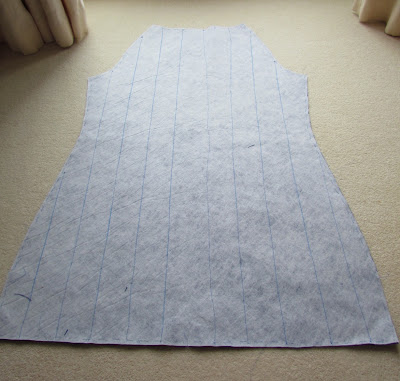 The second change I want to make is to the patch pockets. I added huge patch pockets with a flap on my first version. Huge pockets are a must. I end up shoving all sorts of things in them. I'm not changing the design of the pockets, just the construction of the lining. The pocket lining on my first version is more of an inter lining. So if you peek inside the pockets you can see the pocket seams. I want the lining to be more of a true lining so that the seams are not visible when you peek inside. The lining will be more like a pocket bag and I think it will need a back lining piece which extends up into the pocket flap. It's going to take me some time to work out how to do this, but you know I like nothing better than a geeky challenge!

Another minor change I've already alluded to is to add interfacing to the collar pieces. Hmm the collar on my first version is pretty stiff already. I'm not sure why I'm doing this but I'm going ahead with it anyway! I'm also lining both collar pieces as the original has only the outer collar piece lined.

I just need to cut out the interfacing on my placket pieces and then I can start sewing. This is not going to be a quick make with all the extra work I've added. I also have very little spare sewing time at the moment. It might be some time before I have another finished make but hopefully I'll be back soon with some photos of my Florence and Fred dresses.

I've started sewing the sleeves so I thought I'd update this post to show how I've got on with the thickened fabric.  It's come out fine so far and the seams after topstitching have come out fairly flat. I'm being fanatical about grading the seams to remove the bulk. It's amazing what a difference this step makes.  Here's a picture of a graded seam from one side.  The lowest point is the interfacing, then the middle layer of the outer shell is cut leaving the third layer of the outer shell uncut.  I then snipped through the curved areas in the sleeves, through all the layers.  The ends of my vertical hand stitched lines used to attach my interfacing are tied at the edges.  I trimmed around these parts so as not to undo the hand stitching. 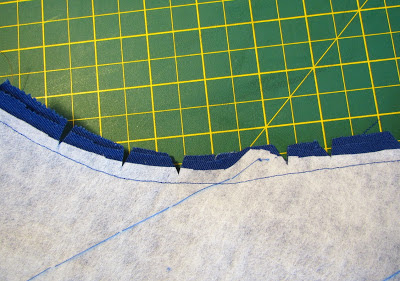 Here's the view on the other side.  Here just the interfacing is cut down, the next layer being the uncut third layer described above. 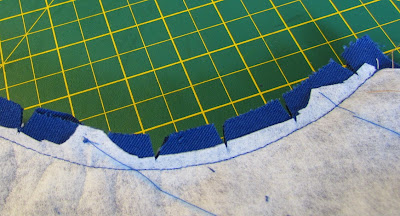 Here's a picture of the topstitching. 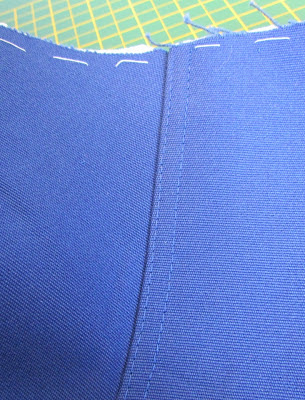 The Great British Sewing What? Yes I know I'm late with my observations on this but better late than never!

Like many of you I've been a great fan of the series, watching every episode on the TV and then on the iPlayer. My thoughts very much echo everyone else's. It was surprisingly good and exceeded expectations. How wonderful that it focused on garments rather than home furnishings and cushions which is what I thought it would be like.

The challenges were really tough. Most home sewers sew for themselves and yet there was a weekly challenge to tailor a garment to fit a model. I really like how this not only pushed the sewers involved but the judges' comments got me thinking about things in a new way and have encouraged me to up my game. The show hasn't just been good for encouraging new sewers.

For example Patrick and May talked about “balance”. This is not something I've thought of before but it's a problem that I often have without knowing what it was! For example the bodice seeming to be higher in the front than behind or the hem rising up higher in the back than the front. May also talked about the flow of a pattern starting from the centre which I haven't thought about before.

I'm glad Ann won as she really was the best sewer. I loved her jacket and man's shirt. Hardly a level playing field given her experience but there were no categories in the show so the best person won.

I went to a local fabric shop a couple of weeks ago to buy thread and I got talking to the owner about the show. She agreed that Ann was the right person to win but she wanted Lauren to win. She thought this would have encouraged more young people to sew. This was an interesting perspective from a lady who was not young herself but could see the benefits that Lauren may have bought to sewing (and perhaps to sales in her shop!)

Happy sewing until next time!
Posted by Katy at 13:31