This is the last of my Minoru jacket tutorials following my Royal Blue Minoru Jacket.

Before making this jacket I had never inserted snaps. I'll be fine, I thought. There's bound to be a tutorial on-line. If there was I wasn't able to find it. There were a few tutorials but with different snaps to those I was using. I started my practice attempts by, gasp, working it out for myself! The instructions on the tiny packet were minimal to say the least. My biggest problem was working out what part joined to what, and which way round.

On my first attempt I inserted the parts the wrong way round so, unsurprisingly, the snaps wouldn't close. I trawled the internet again to see if I could find a tutorial. The best I could find was a tutorial for adding snaps to home made nappies of all things. The tutorial was helpful in showing which way round to insert the parts so my second attempt was successful.

Another thing that put me off trying snaps was the misconception that special equipment was needed. If you're doing snaps a lot then specialist equipment makes the job easier but you totally don't need it. I just used the little tools that came with the snaps, a hard surface and a hammer.

This tutorial shows how I inserted the snaps on the storm flaps I made on the jacket. As the upper snaps were inside a hidden flap, they were awkward to insert to say the least. I suppose in ready to wear they insert the snaps before the plackets are sewn into the jacket. However I wanted to make sure the upper and lower snaps lined up correctly so I inserted my snaps at the very end.

Anyway enough talk, here's a reminder of the snaps, which gives you an idea of why they were awkward to insert. 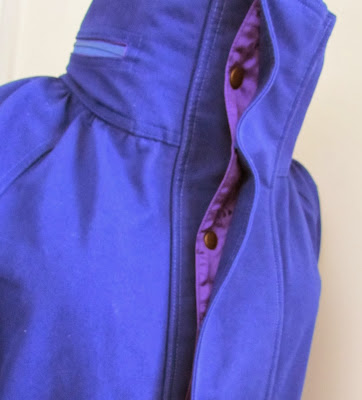 If you have any problems downloading or with the tutorial let me know.