The Agatha was my second sweater and my first Andi Satterland pattern. Her patterns were a major factor for me in deciding to take up knitting. I used to watch from the sidelines as lovely sweaters were being made while resigning myself to a future of lame ready to wear. Now I can join in the cropped cardi and floaty dress combo whenever I want. I'm so easily pleased!

Anywhere here are some photos. It was super hot today so the cardigan was off as soon as the photos were taken. 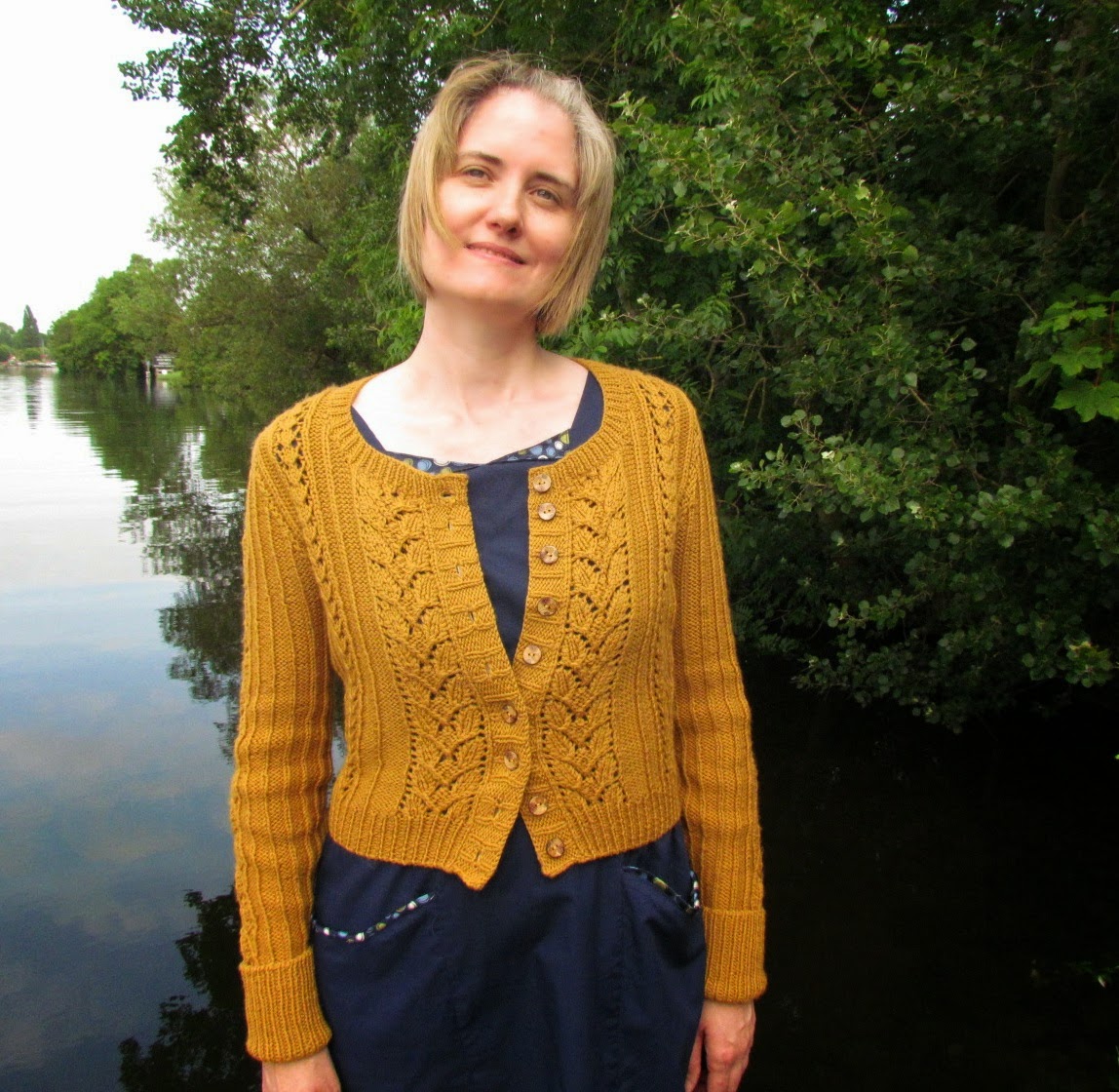 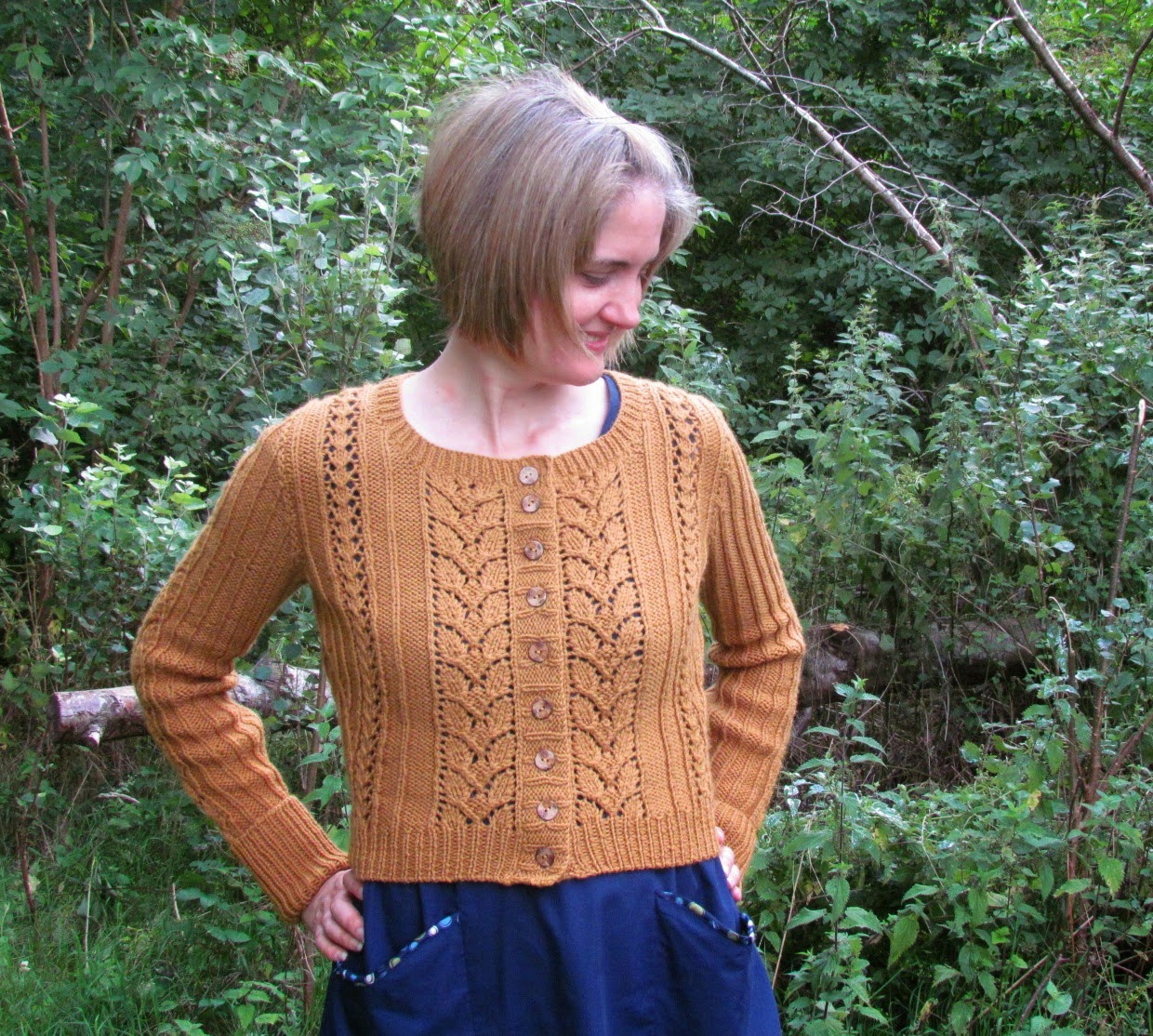 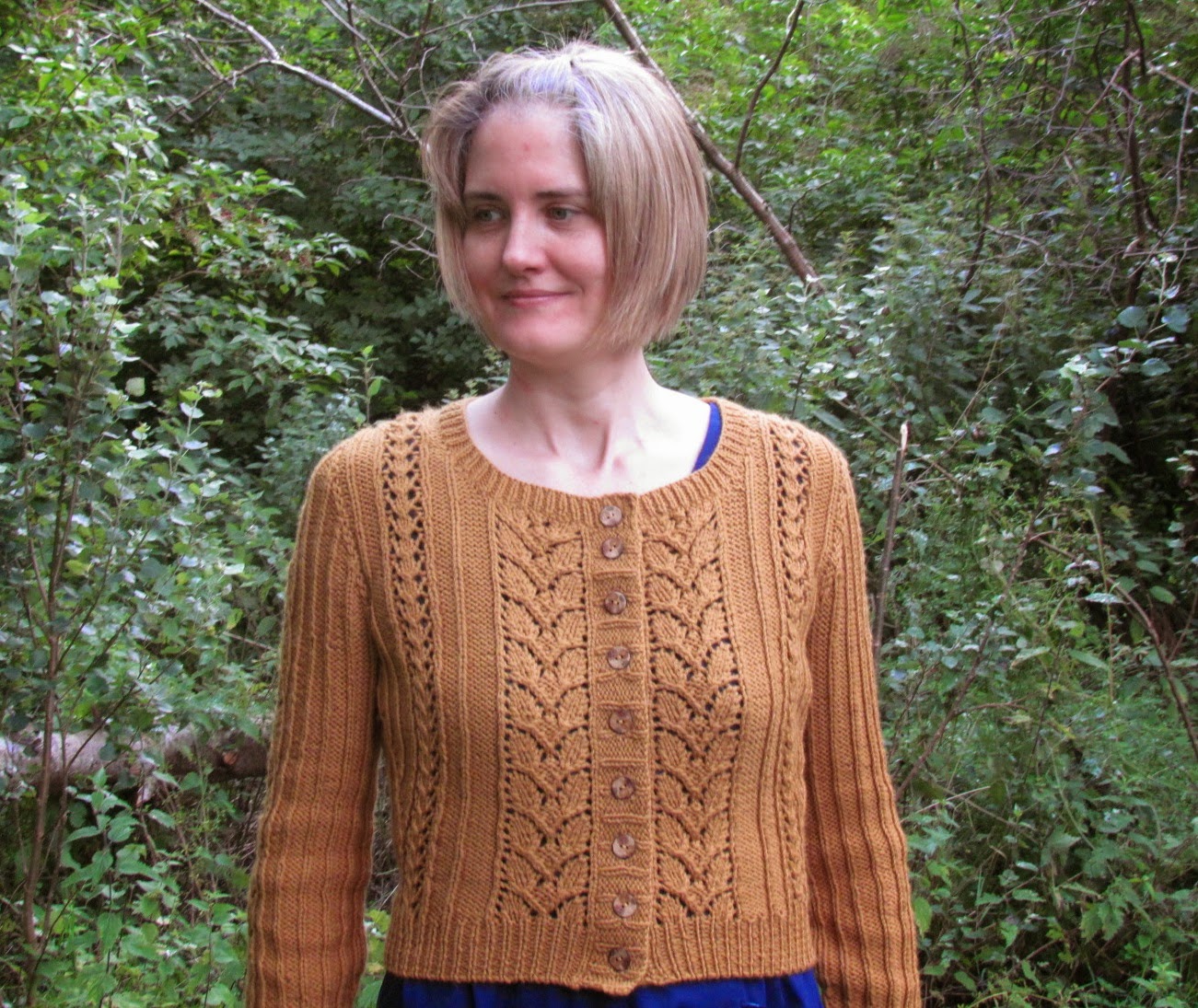 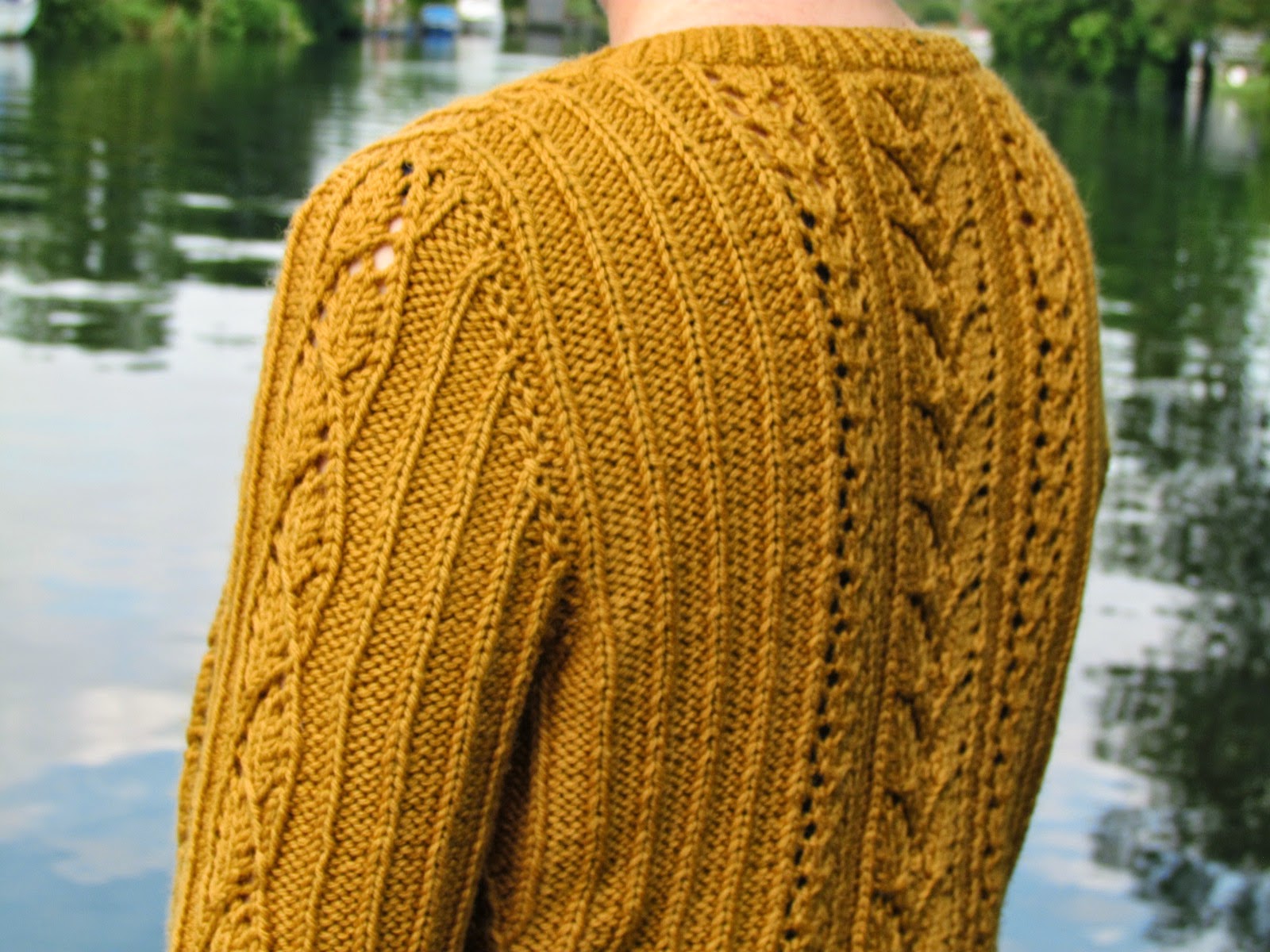 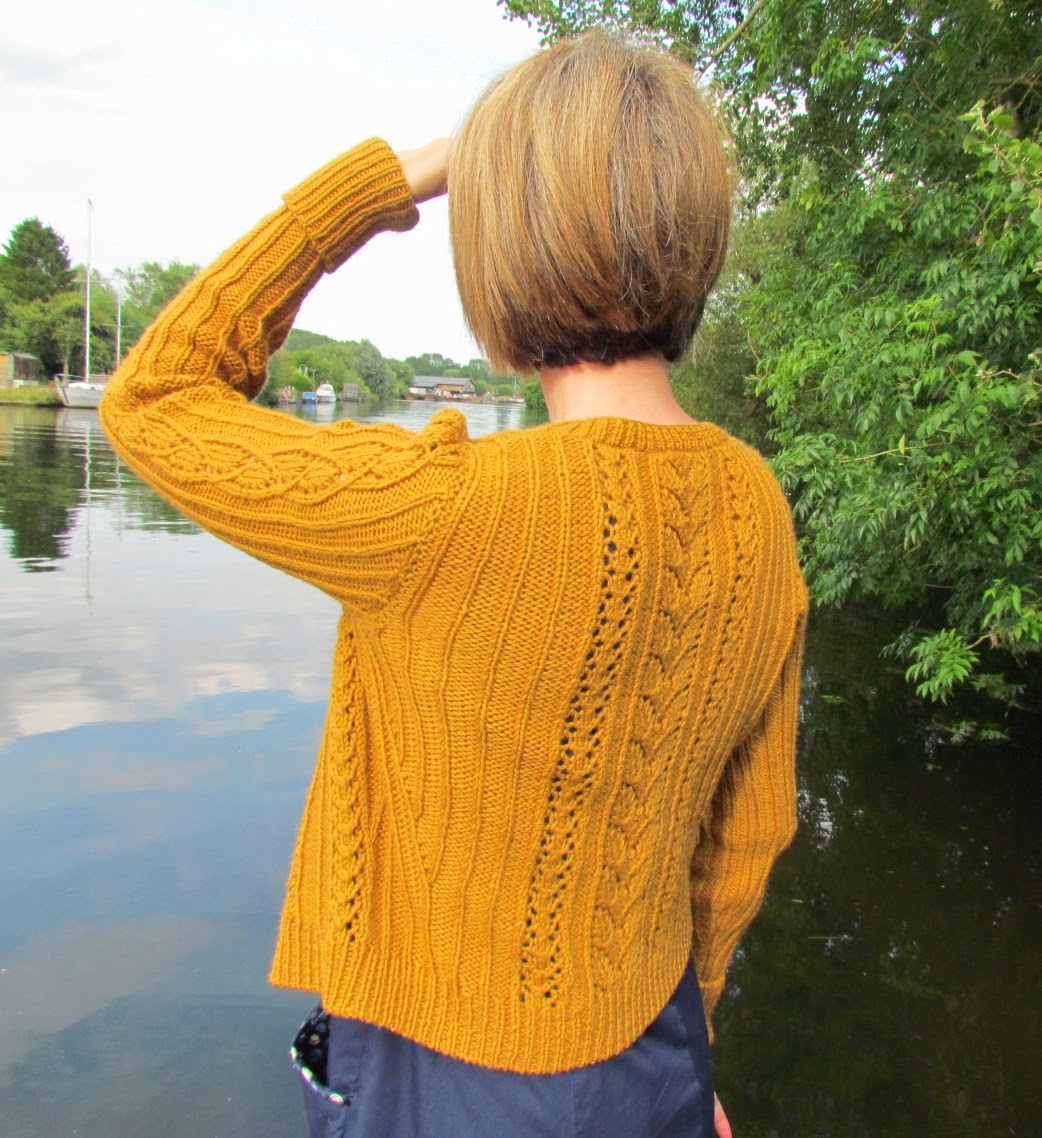 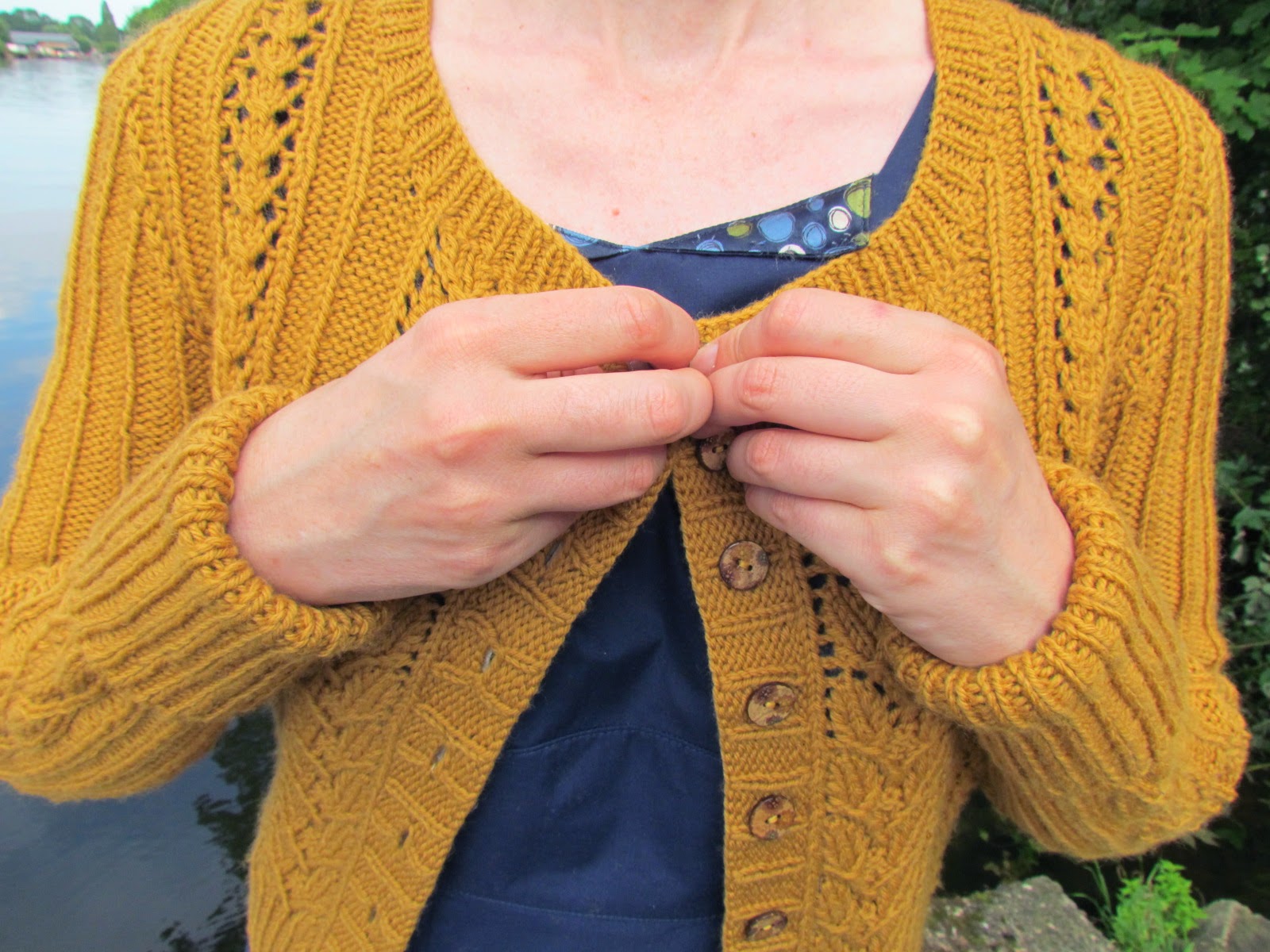 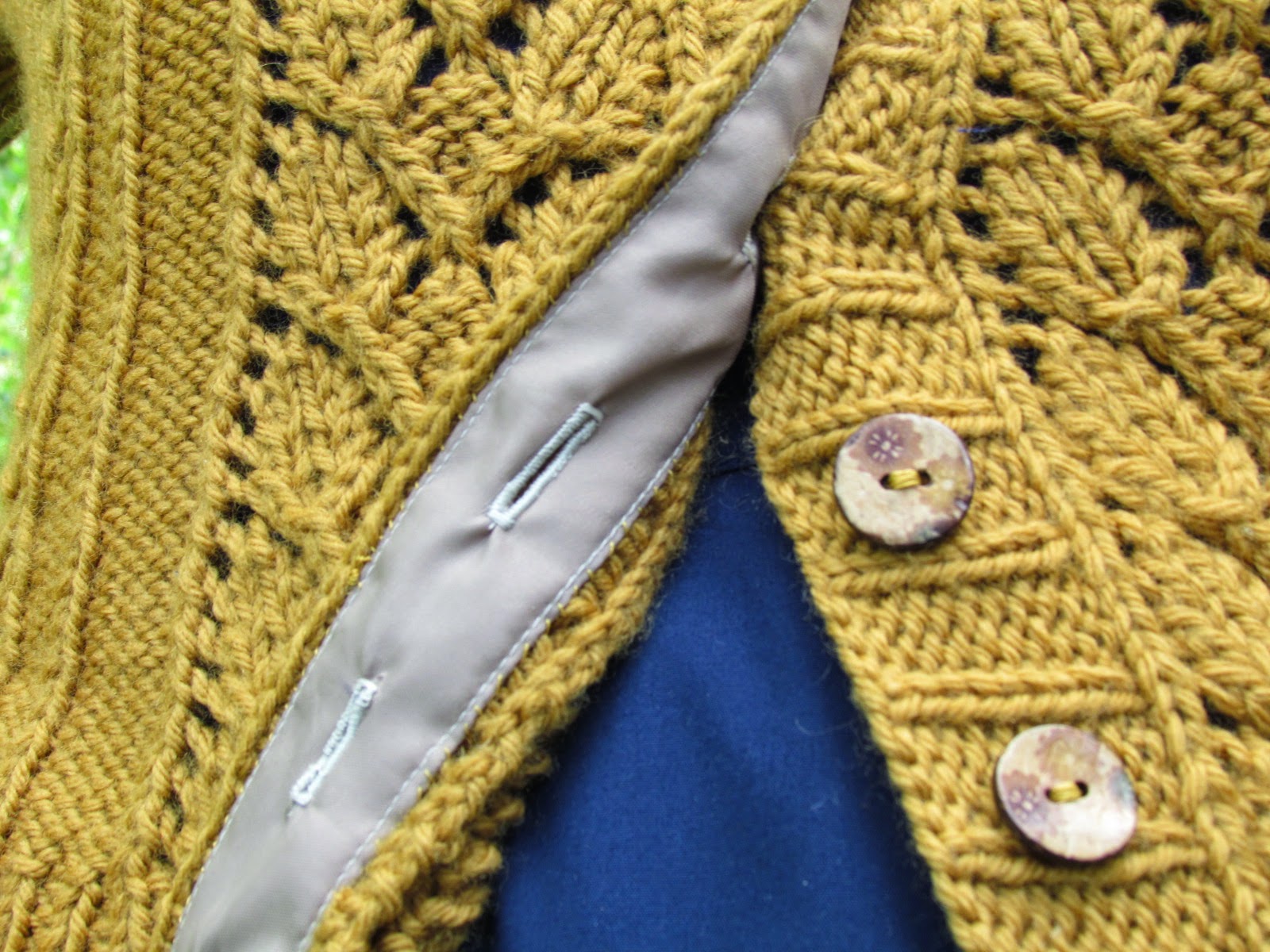 I love the construction of this sweater. After knitting seamless sweaters I am not sure I would want to knit flat and seam (or why anyone would).

I wouldn't say the sweater was hard but you do need to keep your wits about you. I had read that people had to rip back because they lost track of their rows on the lace panels. My method of knitting from a pattern so far has been to cut and paste the text from the PDF pattern into a Word document and then to write out all the rows. So for example if the pattern says, repeat the previous 2 rows 8 times, I would write them out that number of times (sometimes with increases or whatever). This takes extra time but I don't mind because it means as soon as I complete a row I write “done” next to it on my document. For the Agatha this meant writing out all the lace panel rows I needed in a particular row into each row on my Word document. There was no flipping back and forth to separate charts for me. I wanted everything I needed for the row in one place. I wasn't about to rely on a post-it note to keep my place in the charts, particularly since there were 7 lace charts to follow when knitting the joined body.

The Agatha is mainly straightforward between the lace panels, with relatively mindless ribbing and the odd increase / decrease here and there. When I reached the stitch markers I would pay more attention to following the lace pattern. I would also regularly count the stitches between my lace panel markers. Sometimes the counts were off, usually because I was missing a yarn over. This is easy to add in when I next come to it by just lifting the yarn between the stitches. I soon learned to “read” the lace stitches which was really helpful when trying to see where I had gone wrong in dropping a stitch. For example the ssk's and k2 and k3 tog's are easy to recognise. It's important to learn how to do this as you cannot keep undoing your work every time you miss a stitch. You at least have to try and work it out and rip out only if all else fails and you can't bear to continue knowing there's an error there. As I said, with me it was mostly leaving off the yarnovers so no major problems fixing.

The lovely thing about knitting a popular pattern is reading the notes of those who have made the pattern. Here are some of the tips I used.

From Johanna at Making It Well. I followed her link for a stretchy sewn bind off. She linked to this video. I also found this 2007 blog tutorial which seems to be the same. I now use this bind off all the time. I follow the blog tutorial now rather than watching the video.

From Gail at Today's Agenda there are lots of useful tips on her Miette knit along posts. I used her tips for the button bands. Firstly I knit them with a smaller needle. I also twisted the first row of stitches after the pick up row (ie by knitting and purling the picked up stitches through the back loop). Lastly I picked up at the rate of 2 stitches for every 3 without worrying about how many the pattern said. Funnily enough I ended up with the same amount as required by the pattern.

I followed Lladybird's lead and re-inforced both button bands. When I did my Agatha Lladybird had not yet written up her tutorial for doing this so I kind of winged it. I couldn't find any suitable ribbon so I used sew in interfacing the size of my button bands, less about an eight of an inch all the way around so it wouldn't peek onto the right side. (You can also use iron-on interfacing). I then used a lining fabric in my stash and cut it 1 cm bigger than my interfacing strip all around. I then ironed over the 1 cm hem on all sides and then stitched the strip to the button side of my button band with tiny stitches. With my button hole side I pinned the interfacing strip to my button band and then marked where I needed to sew the buttonholes. I then machined button holes on the interfaced strip. If there is one tip I can give here, it is to make the machine buttonhole slightly bigger that the buttonhole on your cardigan. This is because when I came to attaching the strip to my cardigan and matching up, it wasn't completely accurate on some and I had to cut into the bar tack of the button hole to enable my button to fit in. I also started to hand stitch my machined buttonholes to my cardigan buttonholes but this didn't work out so I left them loose. I noticed that Lladybird's tutorial also leaves them loose.

Gail from Today's Agenda also linked to this brilliant buttonhole calculator which I used to calculate the spacing in my buttonholes.

I made the button band wider. I did about 9 rows instead of 5. I also did 9 buttons instead of 7.

I did the medium size which has an inch of positive ease in the bust. The cardigan is slightly more slouchy than intended but I'm not too worried about that. I will embrace the Andi Satterland negative ease a bit more in a future project. Inexplicably the pattern came out longer than the schemeatic even though my gauge was correct and I followed the pattern.

If I were to make the pattern again with negative ease I would have to make the body smaller and use the same size sleeves / armholes. The sleeves and armholes are nice and snug on the medium so would be too small if I were to knit the small. I will have to learn to modify patterns at some point.

I think that is about all I can say. There is the odd error here and there in the pattern. Some of them are noted in the Ravelry comments on the pattern. Also look at the forum posts on the pattern on Ravelry (a couple of which were started by me when I became stuck on the sleeves, which turned out to be an error in the pattern).

Andi is brilliant in replying to comments. I messaged her a few times on Ravelry. Mostly she replied instantly and I never had to wait more than a day for a reply.

I'm wearing the Agatha with my Rooibos dress which goes really well with it.  It's funny that I'm having to think really carefully about future hand sewn clothes to ensure they will also go with my hand knits.  I don't have a lot to wear with my Agatha at the moment.  I haven't worn leggings for ages but I've discovered the Agatha looks good with leggings and a floaty ready to wear tunic that I have.

I have just finished the Myrna. It is blocking at the moment and I want to re-inforce the button bands again so it may be another couple of weeks until that is finished.

Still no sewing. I tried to join in the Untangling Knots Outfit Along but I had terrible problems with my muslins. I tried the Anna dress and the Ava dress and for both the bodices came out too short. I have therefore left sewing for a bit and will remember to measure before I cut a muslin in future! The Outfit Along has turned into the Myrna Along for me but never mind.


Happy sewing and knitting.
Posted by Katy at 15:32