This is the fabulous Cable Yoke Jacket from Kyoko Nakayoshi. 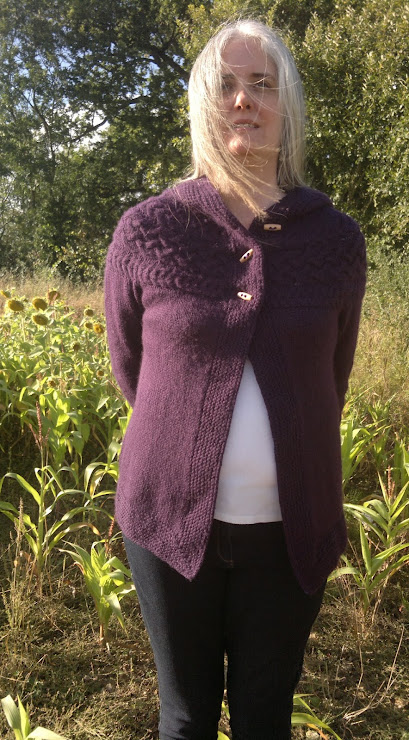 I started this on 8 May 2021 and used Cascade yarn Eco plus in purple colourway 3121.  It is a bulky weight yarn.  The pattern asked you to knit the yoke in size 6 mm needles and the rest in 5.5 mm.  I swatched the yoke in both and I preferred the look of 5.5 mm swatch so I knitted everything in that size needle.  I knitted this in the size 14-16.   I would normally do an 18 but I read notes from others on Ravelry that said it comes out big so I went a bit smaller, on top of using the smaller needle for the yoke. 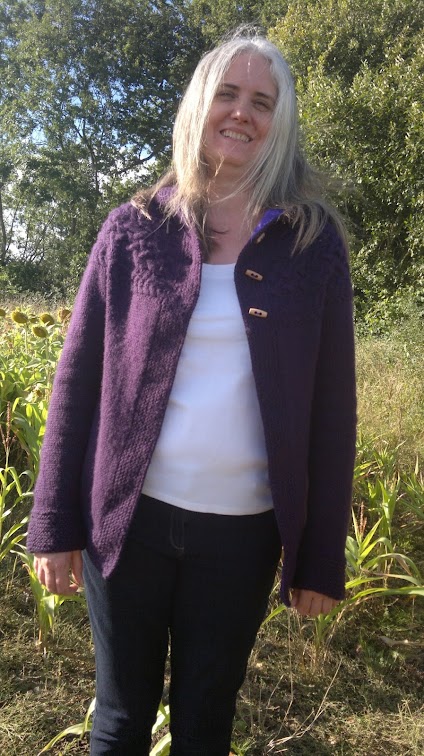 This was a departure from my usual little cropped sweater or cardigan.  I thought the yoke would be a challenge along with the hood.  It was actually very straightforward to knit once you figured out what was going on.   The yoke is knit first in a long strip, like a scarf.  It had an interesting short row construction.  So there were a couple of purl stitches between each of the 3 cable panels and there were short row turns at each of those points.  The short rows had the effect of making the top of the yoke shorter than the lower edge.  Very interesting construction and this could be used for other projects. 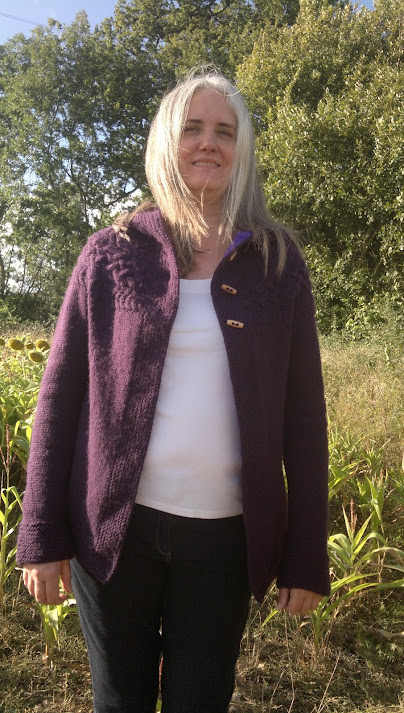 After the yoke you pick up stitches across the long lower edge and then knit down in stockinette, dividing at the sleeves.  It was shortly after this point that I decided to do the hood and put the body on hold. 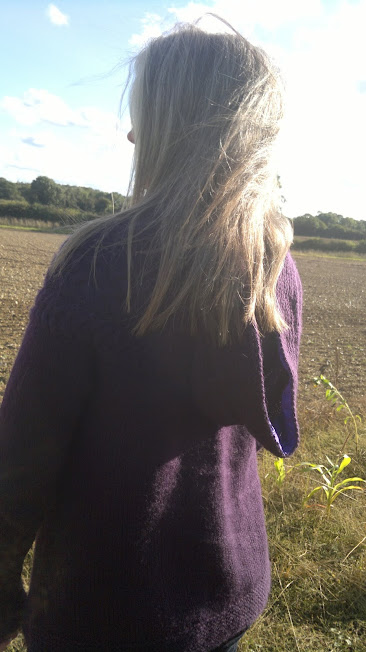 The hood too was an interesting construction.   You pick up stitches across the neckline and reduce slightly with decreases and then a couple of inches of ribbing.  The back of the hood is knit up after increasing slightly.  I did it longer than the pattern said for my size as I wanted my hood to be big and floppy and not snug.

The centre back portion of the hood was 25 stitches with a slipped stitch on either side.    The stitiches either side of the 25 stitches are the side stitches.  What you do is work 52 stitches (for the size I did) and then turn.   You slip the first stitch, work 25 stitches , and then decease a stitch and turn.  You then just keep repeating.  So you are only working the centre stiches after the first 52 stitches.  You keep slipping the first stitch, and the side stitches outisde of the 25 centre stitches are gradually being eroded with the decreases.

You don't have to keep counting the 25 stiches, it is easy to see where you work up to.  The turn creates a gap between the 2 stitches.  The decrease is worked using the stitches on either side of the gap.  I was able to do read while I was doing this.  The trouble was I must have missed out a decrease along the way as my side stitches on one side ran out and I still had 2 to work on the other side.  I used a couple of german short rows to work back and forth to work the final 2 decreases on the other side. 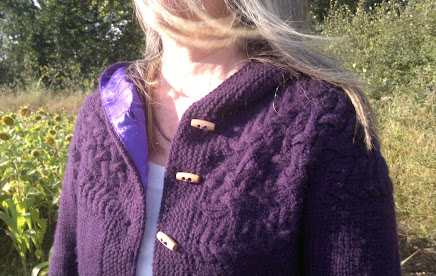 I then continued knitting the body to my required length (I could have made it an inch or two longer but never mind).   You then do a garter stitch edging around the entire jacket, taking in the hood, front edges and the hem.  The two front corners have an interesting mitred edge that I hadn't done before.  It didn't occur to me that you would need to increase at each of the corners for the fabric to turn around the corner.  The increases used in the pattern were yarnovers which confused me even more as I had only previously used yarnovers in lace to create holes in the fabric.   After asking a question on Ravelry the penny dropped that these were increases.  Yarnovers that are purled on the other side do not create a hole.  Apparently yarnovers produce a stretchier result than an M1 increase which may be why it was used here. 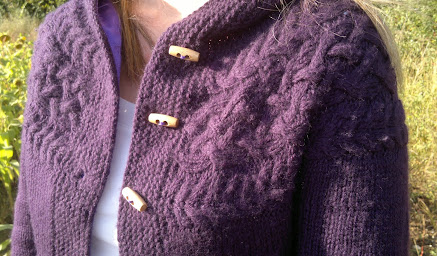 The buttonholes were a bit of a challenge.  I used my usual one row buttonhole but it created a hole on the right side of the buttonhole which I had never had before.  I thought I must have done them wrong so I ripped back down into the buttonhole (to avoid me undoing 600 stitches plus of garter edging) to re-do the buttonholes.  The gap still appeared.  I figured that it must be the garter stitch fabric which emphasises the hole.  I just carried on and worked the yarn in at the end to close up the gaps. Finally I then completed the sleeves with a garter edges to my desired length. 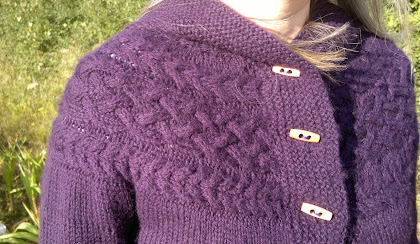 I love the wooden toggles - so cute!  I did my usual trick of re-inforcing the edges with interfacing and lining.  I usually just do the centre front button bands but for this one I did all the way around the edging, taking in the hood and the hem.  This has provided a nice structure to the jacket.   I also plan to do the same on the sleeves at some point, and to add some lining to the sleeves to make it easier to slip on over long sleeved tops.  I will do that in longer time though - no rush (if I do it at all - ha ha).

We have had unusually hot weather in the UK in late September so today marked the first time I wore the jacket out.  It was a perfect temperature for the jacket.  We stopped and took some photos of it when we came back from the supermarket.

I would thoroughly recommend this pattern.  Don't be put off by thinking it is complicated.   I had this in my Ravelry favourites for years and I decided to bite the bullet and do something different.  It has certainly paid off and I will enjoy wearing this jacket.

At the moment I am knitting my partner another sweater but this has been interrupted by me knitting little mini Christmas sweater decorations.  This has also introduced me to knitting intarsia in the round which is another thing I have never done before.  I think I have just about picked up the technique.  I am toying with the idea of knitting an intarsia motif on a sweater for my next project.

Happy knitting and sewing until next time.