I have now finished by second Jersey top using Burda magazine pattern 106B from February 2011.  Here are the photos. 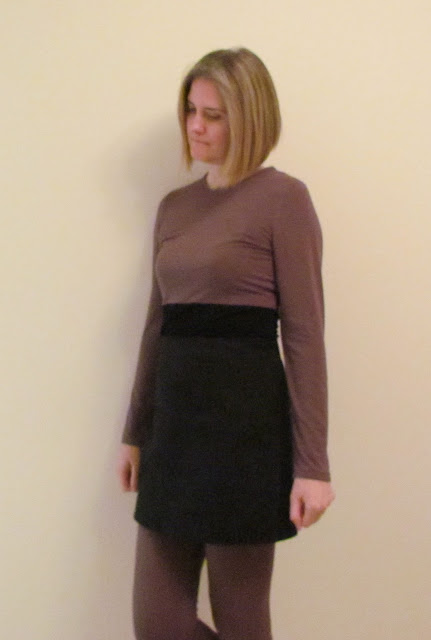 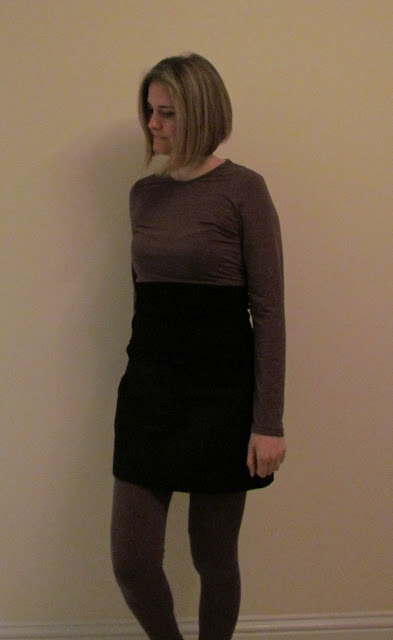 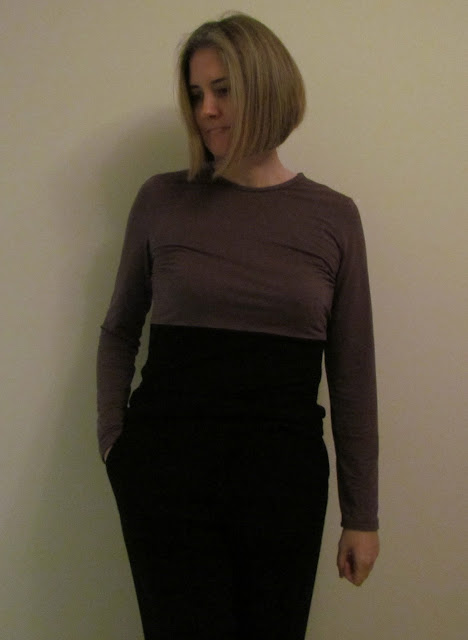 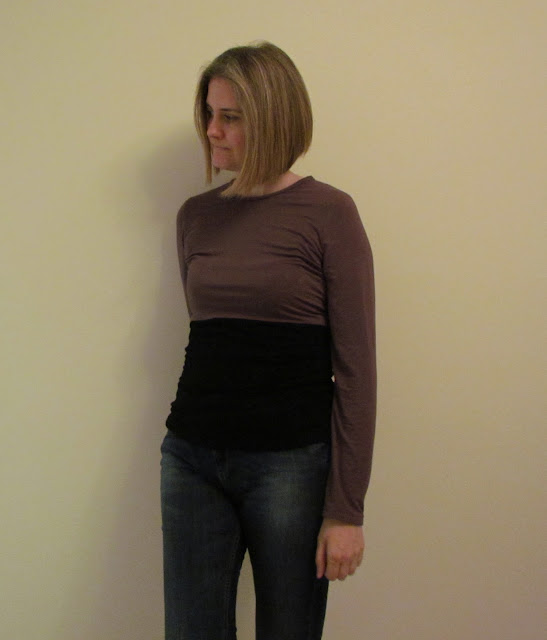 I made this top from leftover stretch jersey from my black and pinky brown leggings.  (The pinky brown leggings are in the first two pictures).   I decided to have the lighter colour on the top.  I simply cut both strips of fabric on the lengthwise grain, then pinned and sewed them together.

Without realising it I had my first go at matching up stripes.  I can't remember exactly what I measured now but I was there with my ruler measuring something and they have matched perfectly.

My attempt to be all green and use up leftover fabric may go slightly out of the window.   The top doesn't look right with my denim skirt  because of the black strip but the pinky brown would make a nice top on its own.   The top looks ok with the black skirt in the first two pictures but it would look better with a skirt in the same fabric as the black.    I may have to go and buy more fabric in both colours now!

I'm currently working on a wrap top at the moment.  I have had a busy couple of months at work.  It has calmed down a bit now so I may be able to get some sewing done during the week.

Happy sewing.
Posted by Katy at 12:18 No comments:

Sewing fans will need no introduction to the "me-made"months organised by Zoe.  The challenge is to wear at least one item of hand-stitched clothing / accessory / jewellery during the month.  So far there has been Me-Made-May, Self-Stitched September and they are currently mid-way through Me-Made-March.

These groups have been a bit of a revelation to me.  I am amazed at how many things some people have made.   They have made more than enough to keep them going through the entire month and no doubt more.   One major reason why I can't participate in these groups at present is that I don't have enough handmade stuff.   I am also supposed to wear "a suit" for work (although I only have two suits that I actually wear and the rest of the time I wear shift dresses with cardigans ).   The things I have made so far have not been work clothes but more casual weekend wear (eg my denim skirt) or smart evening wear (eg my Pendrell).

However we do have a "dress down Friday" on the first Friday of each month.  My own little challenge has been to see if I can wear at least one hand-stitched item on these days.  This is a slightly more achievable challenge for me given the type of thing I am currently making.   I have decided to document the progress of my dress down days.  I'll also give it a name - "My Fabric Fridays".

Here's what I have managed so far:

I wore my black denim pinafore dress with a little plum red cardigan.  Here is a picture of the Angela Kane pinafore dress that I posted on Burdastyle.  Obviously I wasn't posing away like this in work: 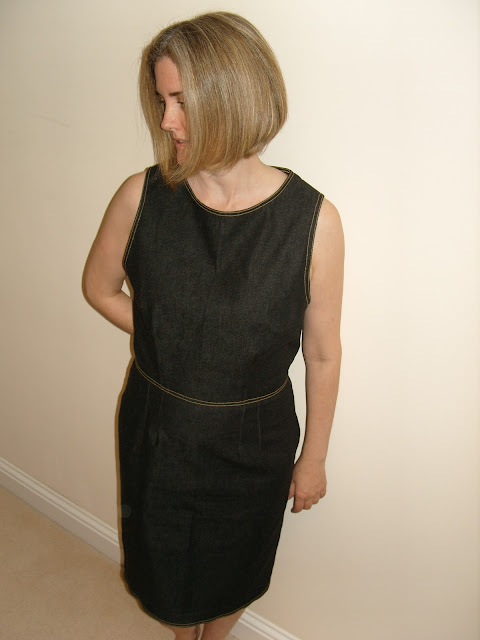 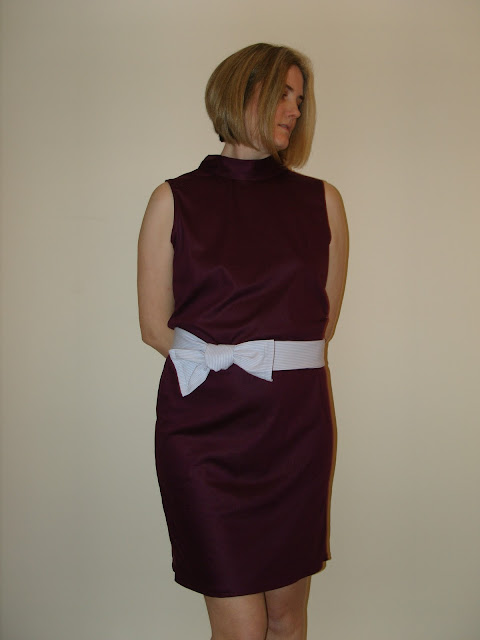 Here is a picture of the leggings with my denim skirt that I posted again on Burdastyle. 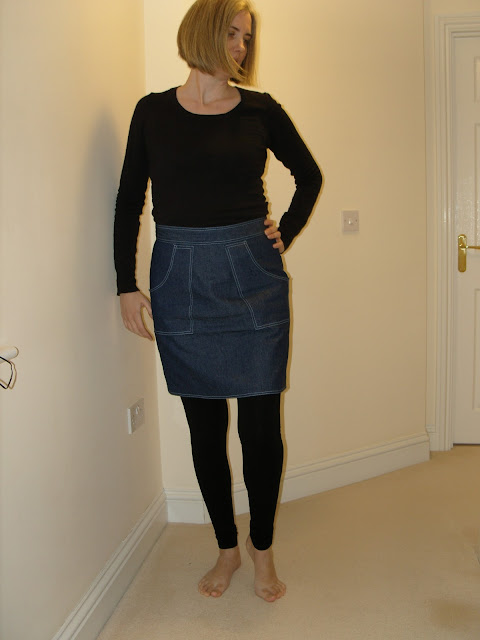 I had a client meeting.  One of the rules of dress down Friday at work is that we don't dress down if we are seeing clients.  This has to over-rule my little challenge I'm afraid!

Apart from March (for which I had an excuse) I have so far managed to keep up with this challenge.  I have made a few more things since February so I should be well stocked for future months.

I am currently finishing off a Jersey top I am making out of remnants of Jersey fabric that I had left over from my leggings projects.

Happy sewing everyone.
Posted by Katy at 02:36 No comments:

Although I'm not likely to be anywhere near water in this little number, I now have a nautical themed top.  I finished my Jersey top and here are the pictures: 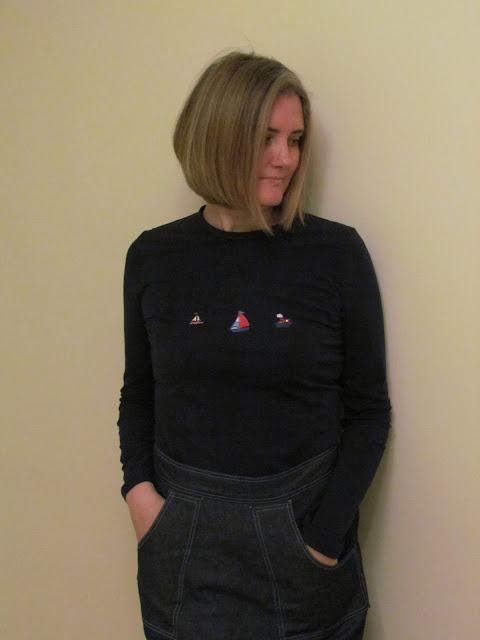 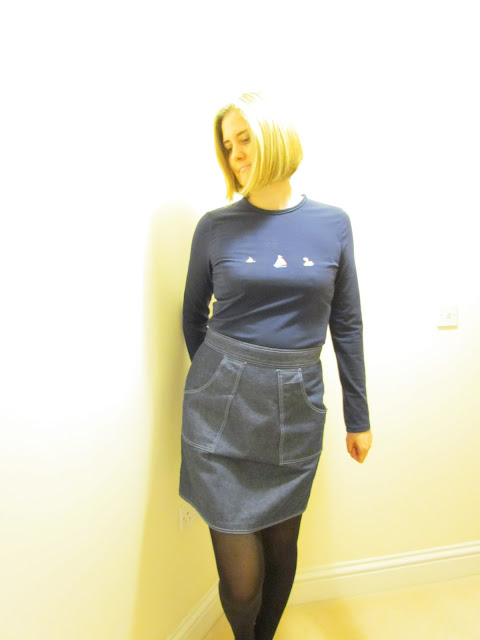 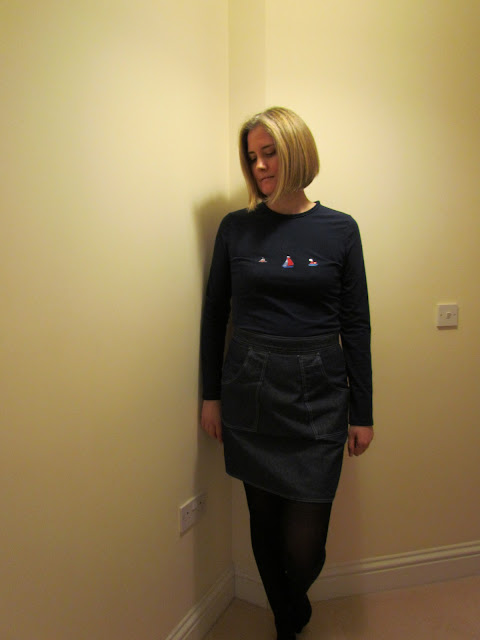 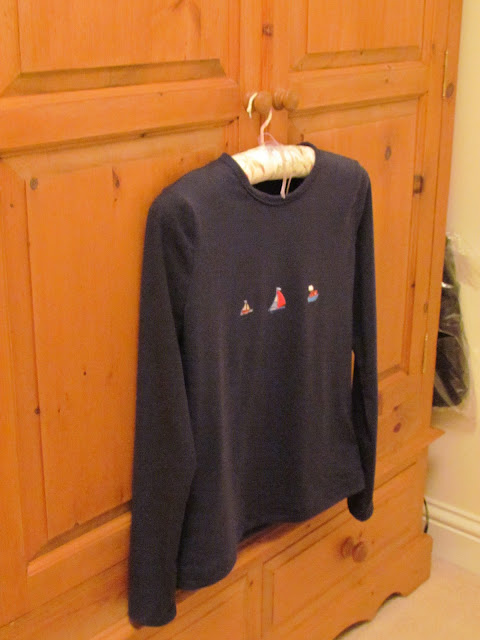 As I mentioned in this post I used pattern 106B in Burda magazine February 2011.   It was my first time tracing out a pattern from the daunting Burda magazine pattern sheet.  I thought it would be a long and arduous process but actually it didn't take too long.  I will definitely be making up another pattern from the magazine.   Once I took the time to figure out which pieces related to the top (and the mini diagram of the pattern pieces and the pattern instructions in the magazine are helpful on this) I went around it with  a blue felt tip pen to make tracing easier.  The pattern markings were also easy to see.  The grain line for the sleeves was marked on the pattern but the grainline is the edge of the pattern piece for the top itself.  In other words the edge that becomes the centre of the top needs to be lined up with the straight grain of the fabric.   I lengthened the sleeves and the top.

This project was not without its mishaps.  When I sewed on the neckbinding, the magazine instructions told you to use stretch stitch, which is usual for seams on stretchy fabric.  However, maybe because there was so many layers to sew through, the stitching ended up being really tight, distorting and pulling the neckline with a roping effect.  I spent ages unpicking it, which took twice as long because it was stretch stitch and so tight!  I then sewed the neckline on with normal stitching and it was fine.

The second mishap was caused by me failing to think which I have learned is necessary for sewing.    As I was cutting out where I could on scraps of fabric I ended cutting out one of the sleeves on the wrong side of the fabric so that I had two right sleeves instead of one of each.  Of course I didn't realise this until after I had sewn the sleeve seams on both and attached the right sleeve.  I then realised the pattern notches did not match up.  I (optimistically) wondered if you could sew it on the wrong way round but you can't they are too different.   As the "wrong" side is not noticeable on this fabric I unpicked the sleeve seam and sewed it back with the "wrong" side facing out.  If there had been an obvious wrong side then that would have been the end of it but luckily I was able to learn and get a top at the end of it.

I then decided to have a look for a motif to sew on and I found these cute little embroidered boats.  I was initially only going to sew on one on the right side but in the end I decided to sew on all three.  In fact they are iron on designs but I put some hand stitches on to secure it.

This is my second handmade top ever (after the Pendrell) and my first top with sleeves.  I have long arms so I love how for the first time ever I have a casual top with lovely long sleeves.

I have some fabric left over from the two other pairs of leggings I made so I am thinking about combining the fabric to make another one of these tops.

I am really pleased with the top and it is the sort of thing I am likely to wear all the time.

Happy sewing everyone.
Posted by Katy at 04:30 No comments:

As mentioned in my Pendrell Update post I have been working on an underlined version of the Pendrell blouse from Sewaholic patterns.  It is now finished and here are the photos: 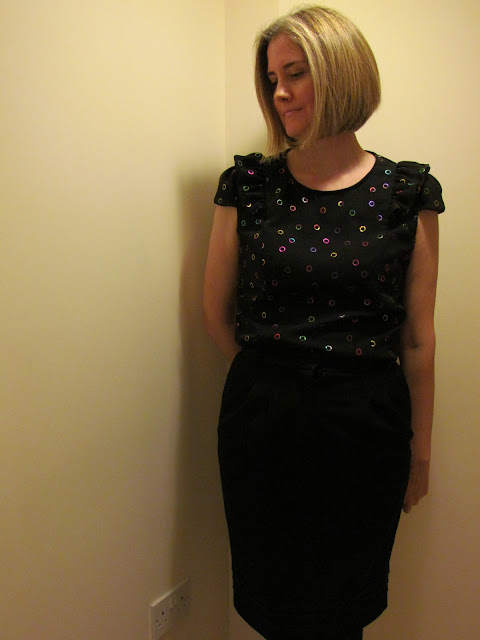 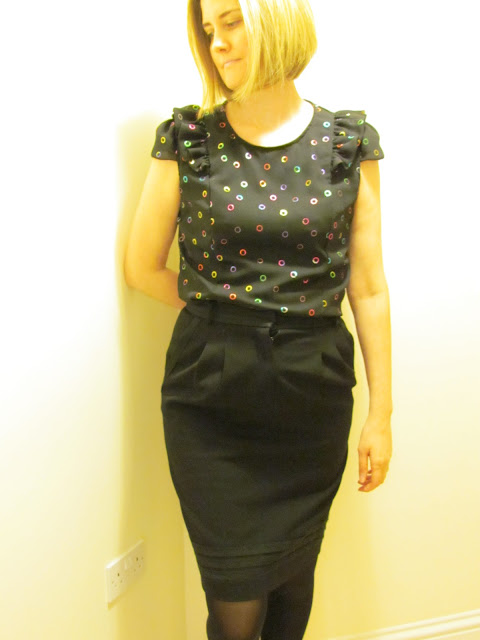 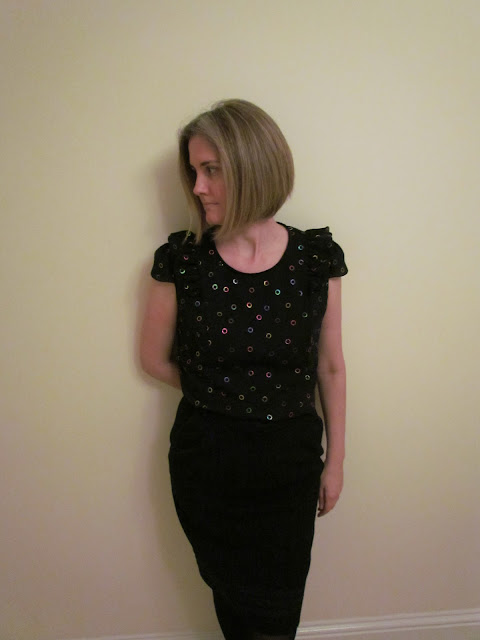 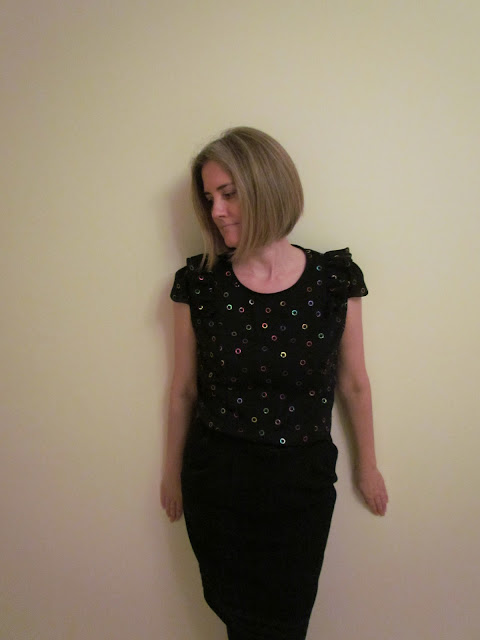 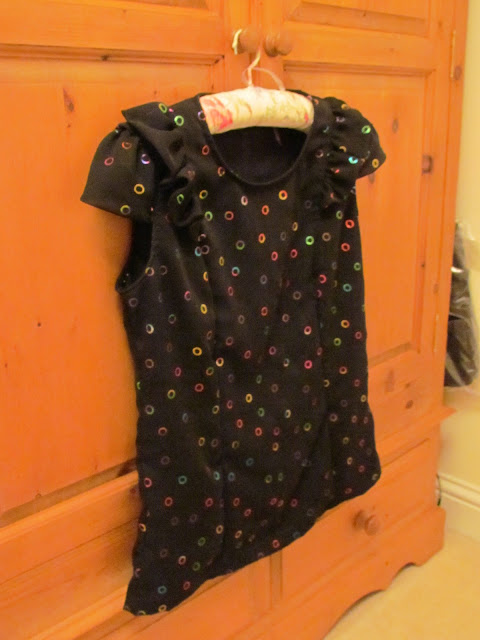 I made the ruffle version and I love the result.   Thank you so much to Tasia for her genius pattern and for suggesting and doing underlining in her sew-a-long.  The underlining has turned this into a luxurious garment with the added bonus of being soft and lovely to wear.
The blouse was easy to sew up.  I love the princess seams which give it a very different feel.  I can see it working as a Pendrell dress by lengthening it.  Something I may do in the future.
I only had to do a minor alteration changing the hip size down one.   I cheated a bit with with the ruffles and I had to sew some of them down.  As the fabric is chiffon they were sticking up a bit!  The sleeves were also huge and I know others have had issues with the sleeves.  Unfortunately I didn't find this out until I had sewn in the sleeves.  I didn't want to unpick them so I have kind of taken them in and tacked them in place inside the blouse.  If I make this pattern again I will definitely fit the sleeves for size before sewing them in.   I will also cut the sleeves in a smaller size given the amount I have taken in.
The self-fabric neck and arm binding is brilliant.  I used the chiffon fabric for the binding in the end.  I ended up using 2 pieces of chiffon for the neck binding and one piece on each of the armholes.   The neck binding didn't really need 2 pieces of chiffon and the armholes are perfectly fine with one piece.   I have used the Pendrell neck binding pattern piece for the neck binding on the Jersey top I am currently making.
I would highly recommend this pattern to anyone thinking of doing it.
Happy sewing and have a good week.
Posted by Katy at 12:36 No comments: