I'm just in time to squeak in a weekend post.  Another finished project - an Angela Kane shift dress.   Here are the pictures: 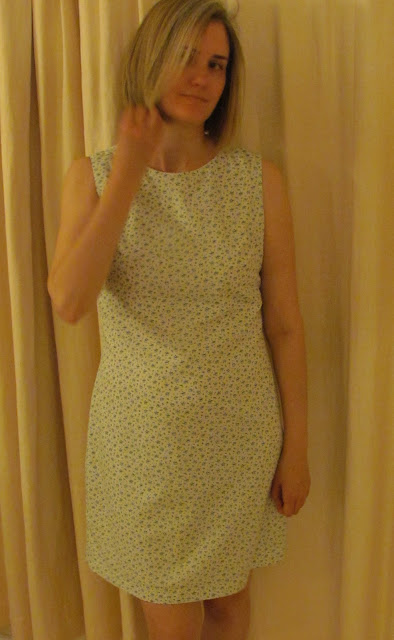 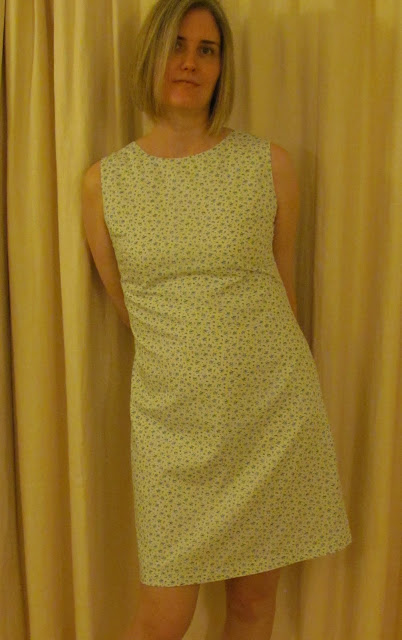 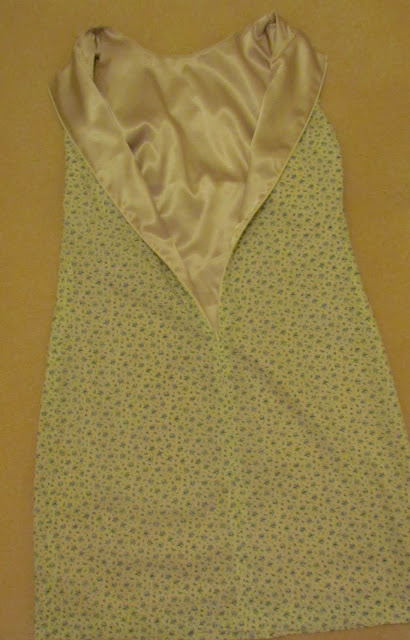 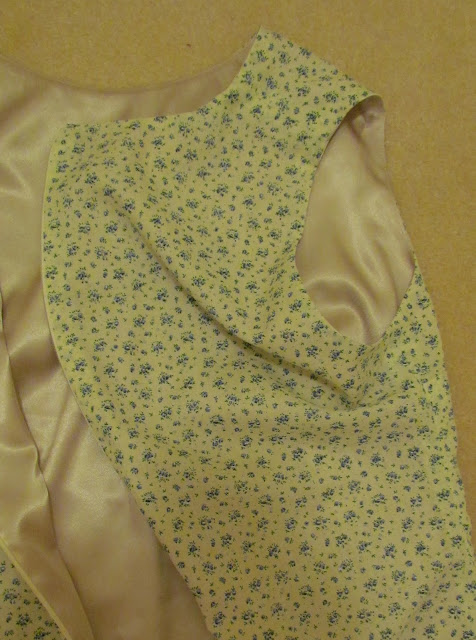 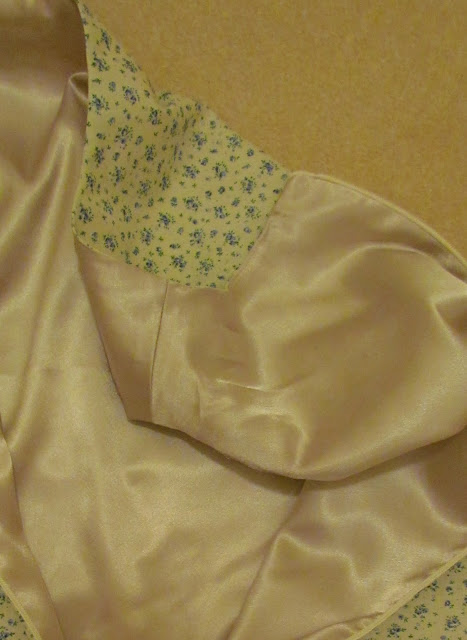 I used Angela Kane's shift dress pattern number 763 here.   I have made this dress before in a chiffon fabric (my Dotty Betty dress posted on Burdastyle in December 2010).   I haven't made a dress for quite a while.  I made Angela Kane's pinafore dress in November 2010, Angela Kane's jersey dress in December 2010.  (I'll gloss over the Vogue dress I made in August 2010).    Also this was my first proper attempt at a lined dress so I thought I would use a straightforward pattern.  It only has 2 pieces and bust darts.

I thought I would do a muslin to see if I could get a perfect fit.  I ended up making the muslin 3 times!  I used a stiff white cotton for the muslin.  My first muslin was a shapeless sack.   I then stood in front of the mirror and starting pinching in the sides and pinning.  I then pinched in some vertical darts in the front and back.  I can't quite remember what happened next but by the third time I had dropped the vertical darts.  I pinched out the excess fabric on the muslin and pinned and taped the muslin.  At the previous attempt I had already transferred the alterations to the side seams to the pattern pieces.  I was going to then transfer my other "pinched" alterations to the pattern sheets by pinching out in the same area.  However Angela Kane's patterns are downloaded onto A4 paper so it wasn't really possible to pinch.  I could have traced the pattern to tissue paper but I decided just to tape up the muslin adjustments and use the muslin as pattern pieces!  I know some sewists say not to do this but it has worked (and I have to say I felt a bit like a pro using muslin as pattern pieces!).  I am really pleased with the fit.  The back is not so good.  I don't think I am advanced enough to figure out what back adjustments are required.  Never mind - the front looks good.

I used a lovely satin lining, the same lining used for my Jade Crescent Skirt.  I used Angela Kane's tutorial on lining posted on Burdastyle here with the following variations:

2.  I didn't slipstitch the last bit of the lining on the shoulders.  I managed to machine stitch everything.

Update - since writing this post I have had questions on how I sewed the shoulder seams once the dress is  turned through after sewing the armholes and neckline to the lining.  Set out below is a further description which hopefully makes it clearer.

Once you've turned through the lining the right side of the dress will be facing outwards.  I reached inside the dress with my hand starting from under the hem of the dress so my hand was sandwiched between the lining and the dress.  I reached up into the shoulder until my fingers poked through the shoulders that have not yet been joined.  I grabbed the two shoulder edges of the dress that needed sewing and pulled them down towards the hem (or as far as you need to comfortably sew the seam).   Sew the seam, press and put it back up.  Repeat for the lining seam and then repeat for the little gap left just below the shoulder seams when sewing the neck and armholes.

I made sure I pinned and hand basted each shoulder seam and went really slowly.  My machine is always on half speed anyway and one stitch at a time is best.  It is hard to get into the corners on the machine so feel free to hand sew any bits towards the start or end of a seam where it is difficult to keep the fabric put under the presser foot.

I also under-stitched the lining to the dress seams at the armholes and neckline.  I did this before I joined the shoulder seams.  Boy, this was tricky particularly the armholes.   I was almost tempted to reach for a needle but I managed to do it in the end!

As usual I used the blind hem foot for the dress hem and as usual I am really pleased with the result.  It really is all but invisible.   I then finished off the hem seam with a zig zag stitch.  I was going to use seam binding to finish off the raw edge of the hem.  Tasia introduced me to this in her Lonsdale sew-along.  I basted on a small section.  It was really easy to insert and I really wanted to do it but I thought the fabric was too fine for this.  I plan to use seam binding to finish seams in future though as the finish looks really good.

I will blog separately about where I came by this fabric at some point.   I am not sure what it is, but I think it's cotton.  Little flowery prints are not usually my thing and not something that I would normally choose.  However I really quite like it.

I now feel ready to tackle a more challenging dress.  I checked my Vogue sewing book and this type of dress is a true shift dress - it only has 2 pieces.  A sheath dress is one with a bodice attached to a pencil skirt.   I would like to tackle a sheath dress at some point in the future.

I am not sure what I am going to make next.  We are now mid-way through August and the summer weather has been pretty atrocious.  There are some lovely Lonsdales out there but I'm wondering if I should now start making some Autumn clothes.  Decisions decision.