Some may acquire fame overnight.  When I worked in London some used to say their salary doubled overnight.  I acquired an out of control fabric stash overnight.

I was happy trundling by with no more than 4 plastic crates of fabric.   An out of control stash would never happen to me I thought.    But then this happened on 17 July and my front room was transformed into this: 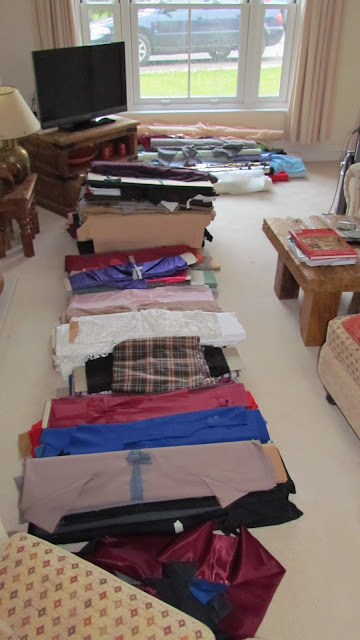 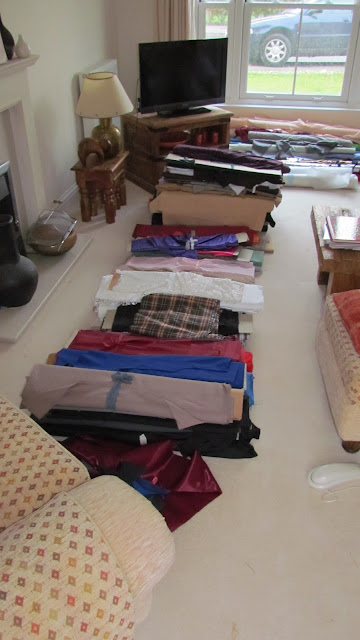 How did that happen?  The morning started like any other Sunday.   I was happily browsing sewing blogs / Burdastyle / on-line news websites.   My chap was browsing Ebay at the same time.  He's always on the look out for sewing related bargains for me to look at.   He's come up trumps before - see my sewing room table.   He then showed me an Ebay sale that was due to end that evening.  A lady who ran a business making Western wear was closing down and selling her fabric.  All in one go.  There were no bids and the starting bid was £300.

She had put one terrible photo on Ebay.  It looked like it had been taken in a dark basement.  You couldn't see any of the fabric properly, save for making out the odd stripe, plaid or bright colour.  I was unsure but my chap insisted it was a bargain.  Being an accountant he made me work out how much I spent on fabric etc and then said it would be worth it even if I made only a few things with it.  The rest he would put on Ebay and get the money back and anyway he would buy it for me!

We then called her and made our way to the lady's house.  It was only about 30 minutes away.   She lived in a lovely big house.  A widow so she lived on her own.  It was really interesting to hear her story about how she got into the business.  She was doing something totally non-creative (I don't think she said what) and had no sewing experience.  In around 1982 she saw a gap in the market for making Western wear.   Line dancing was starting to appear in the UK.  (I seem to remember line dancing become more popular in the early 90's with that Billy Ray Cyrus record).

She learned how to sew and she soon moved into sewing for theatre.  She showed me a couple of photos of actors wearing the clothes she had sewn.   She would also be asked to sew clothes for weddings and special occasion.    She would set up a stall, for example at a country and western fair, which would generate loads of business.  She said she would cut out the fabric and then employ seamstresses to sew them up.  She absolutely loved the business and in particular the social side and seeing people in the things she made.  She said she would still love to be doing it but she couldn't now.  She didn't say why but she was quite old and her hands were shaky.  I doubt she was able to sew.

She then asked if I had my own business.  Oh no, I said.  This is just a hobby.  She looked a bit confused.  She was probably not expecting someone to buy her entire fabric stock just for fun.

All her fabric and costumes were in a back bedroom. There was fabric everywhere and a rail along one wall with the things she had made and her costumes.  I wondered if she had just moved out of a shop as there was no order in the room and everything looked as though it had been dumped there.   I don't think so.  I got the impression it had always been like this and added to over the years.

Anyway, we were left alone with the fabric for about 10 minutes to assess what was there.  I decided there were enough decent fabrics there to justify the price tag.  If we could sell the rest we could make money.   We then talked about money.  We offered £300.  Comically she said she wanted £400 even though her starting price was £300 and she had no bids.   We got it for £300.

We then set about bringing all the fabric downstairs and loading the car.  We thought we would need to make two trips but we managed to fit it all in somehow.  There was one a funny moment as we were loading the car when she bent down to pick up a green stripy fabric.   She said she would like to hold onto this one!  She used it to make a waistcoat.   I didn't know what to say.  My chap re-appeared just as she was moving the fabric to one side.  He frowned at me but I didn't want to say anything.  He said that wouldn't have happened if he had been there!

When we got home we sorted the fabric into three piles - yes, no and maybe.  If I hesitated it was thrown into the maybe pile and we went through that pile again last.  We had a laugh at some of the "no" fabrics.   Here is a picture of the "no" pile.   Check out that lovely browny gold fabric on top and the cowboy hat and boots print underneath.  There's also a print with lots of American flags on! 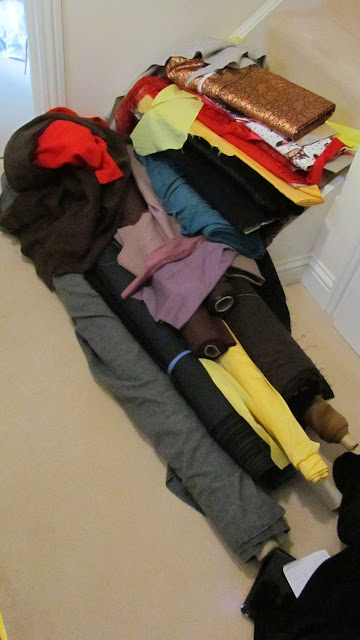 '
Here are some finished projects using the fabric.


I would not have chosen any of the fabrics myself.  The fabrics are on the whole man-made and not luscious by any means.    None of the fabrics crease no matter how hard you scrunch them.  She knew what fabric worked for her business - practical, hard wearing and non-creasing.   I have made countless muslins with her fabric.  There are three rolls of white sheeting / calico.  When that runs out I can move onto other fabric.  I will never be short of fabric for muslins.

The amount of fabric was a bit overwhelming for some weeks afterwards.  I have now moved one half of the yes fabric into the cupboard in the spare room and the other half still sits in the corner of the living room. It is a fairly neat pile and luckily that corner of the living room didn't have anything there before!    The rolls and cardboard that the fabrics are wrapped around do take up a lot of room.  In some cases there was not that much fabric on the rolls so I discarded the roll and transferred to a crate.  It is nice having the fabric on the rolls however as it is easier to move about.

I am working on a skirt at the moment using more of the fabric which I am hoping to finish this weekend.