I've finished my first make of the Banksia top from Megan Nielsen. As mentioned in my last post I did a photo-shoot of 3 makes at once and unfortunately nearly all of them came out blurry. I wish I had one of those remotes but I don't think they have one for my camera. When I'm using my self-timer I'm just photographing an empty wall so there's nothing to focus on. Anyway here are the photos. 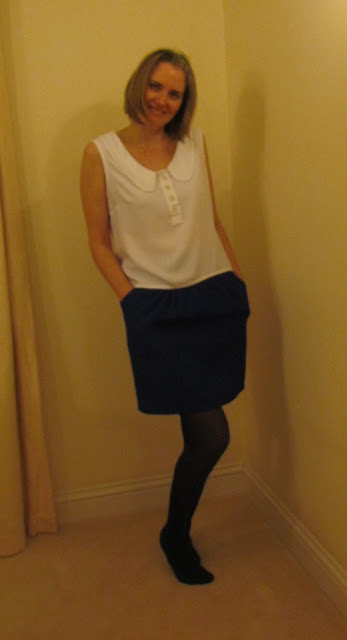 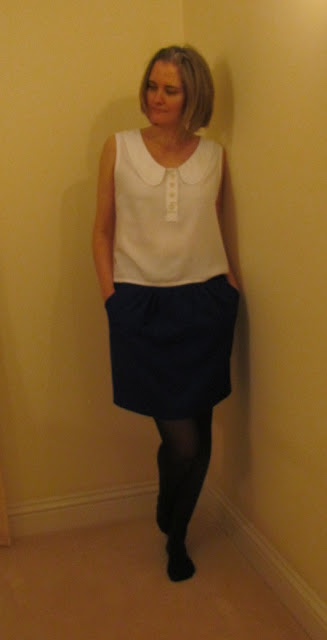 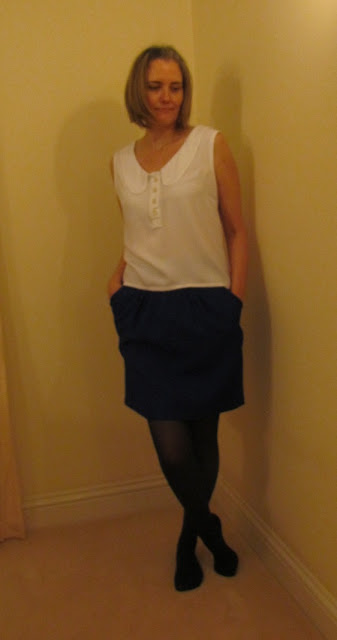 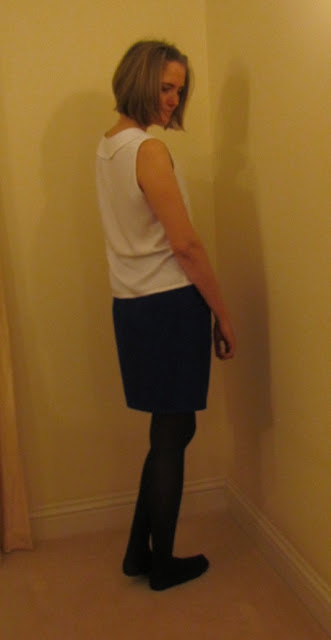 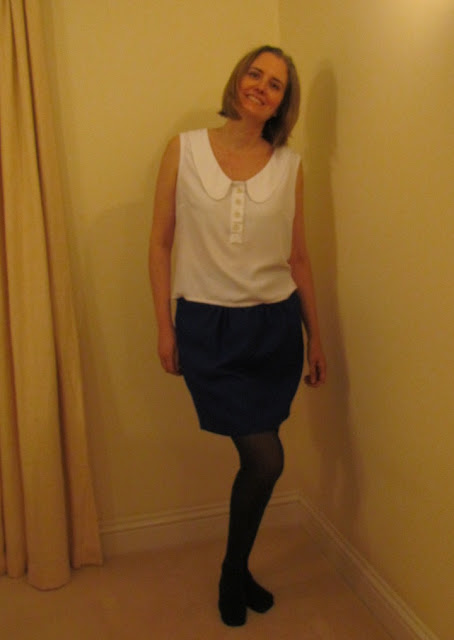 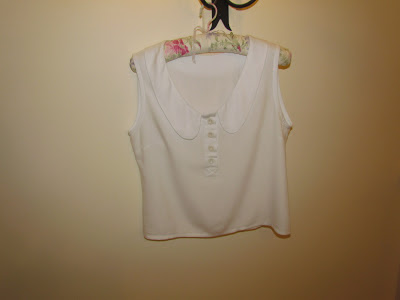 I made it sleeveless so it's a hardly a winter friendly make. It will get some winter wear though because it's cardigan friendly. There's an explanation for the lack of sleeves below but I honestly think that a sleeveless version will get more wear.

I love the way this top can be worn loose as well as tucked in. This is mainly due to the drape of the fabric. It's the same fabric used for my summer make of the Burda 113. Unlike my Burda 113, this top doesn't work under a work suit jacket because it pulls the collar in. No worries. It's more of a casual style and work friendly if tucked into a pencil skirt and worn with a cardigan.

How I love the placket! Like many who've made this top it was my first time with a placket. It was surprisingly easy but tricky to get neat. I have added some extra steps to Megan's wonderful tutorial which I have set out further below. I found these steps helped to get everything neat. I used method 2 for the placket (see her Banksia sew-along tutorials which can be linked from the button in my sidebar). I mainly used the instructions to sew the placket which are truly wonderful.

I managed to find four buttons from my stash. My boyfriend sometimes picks up sewing stuff from auctions for me. While there are wonderful buttons it's sometimes hard to find a decent number that are the same! I added four buttons instead of 3. I could have done with putting the first one closer to the neckline. Instead of interfacing the whole of the placket pieces, I just interfaced the part that would end up being the finished width of the placket. I did this to reduce bulk. Unfortunately the placket stretched out a bit when I was opening and closing the buttons.

I didn't interface the collar at all. I have a bit of a “one size fits all” approach to interfacing partly because I can't justify buying different weights when I have loads already of one weight. I thought my interfacing would be too thick for my collar and would interfere with the drape of the fabric. Not something I'll repeat. Although it hasn't effected the final look of the blouse, I didn't hesitate to interface the collar on my second Banksia (yet to be blogged) and it's turned out fine.

I like Megan's use of bias binding to attach the collar. I used some cream bias tape I had in my stash. I didn't have enough for the sleeves so I had to make self-bias tape from the fabric.

All in all I am really pleased with the top. I particularly like the collar and placket detail – such a unique design. I'm definitely thinking that the placket could be adapted for other makes. A higher neckline with a small square collar? That way the placket will actually get used! I'm one of those people who get irritated by “faux” details, such as false pockets, buttonholes, plackets. Sorry I just can't do it. Even if I never use the pocket it has to be a real one. In some ways this placket is the reverse. The buttons are fully usable, but they're never going to be used because you'd end up exposing yourself!

Anyway I will close the post now and set out below the long and laborious process of making this top for those who are interested. I did some on-line research before making the top. Some people had a lot of issues with the fit and the collar and others had no issues whatsoever. You can guess which category I fell into. My issues were with the bodice back and the back of the collar. It's funny because many people complained about the collar being too short for the neckline. I had the opposite problem. On the initial muslins I had to do a lot of easing to fit the bodice into the collar at the back.

Anyway I hope you're all enjoying the holidays so far. I'll be back with Banksia number two as soon as I can!

Fitting process for the Banksia Top

I cut out a size 12 and sewed it with no alterations, save for a 1 cm seam allowance on the shoulders and the sides instead of 1.5 cm.

Having said I did no other alterations, I did do something of an “extra”. I drafted a lower collar pattern piece one eighth of an inch smaller all round than the collar pattern piece. It came out alright in the muslin so I stuck with it, while vowing to try and get the future collar less wrinkly.

I like the bias binding for the collar facing. I think if you're using a softer fabric then you might want to use self binding, or softer shop-bought stuff.

I chose the harder method 2 in the pattern (so that it's neat on the inside as well). It came out really well. I could have sworn I pinned my collar right up to the basting stitches where the placket is placed, but on my first muslin there was around a 1 cm gap on each side of the placket. It seems the collar seam allowance needs to stray into the placket placement area to reduce this gap.

I wasn't going to alter the bust dart at first. When the top is on, the style is quite boxy and loose and so it wasn't easy to see if alterations were needed. Out of interest I marked where my bust was on the muslin and had a look when I took it off. The actual dart placement was off so I figured there would be no harm in moving it. I moved it about an inch lower.

The armholes were too tight on the muslin. They needed to be enlarged so I would have enough room to move comfortably. This would involve corresponding changes to the sleeves.

I can see so many possibilities for this pattern. I like the dresses I've seen with an elasticated waist and no sleeves. A jersey version would also be great as would a version with a gathered skirt on the lower part, a bit like the Darling Ranges dress.

I took my time sewing the collar and making up the placket. I even re-attached the placket a number of times to try out different tweaks on the construction method. I adopted some of these tweaks for the final version as they worked out well (see below).

Stitch length - I sewed with a 2 mm stitch length instead of 2.5 mm. This appears to have reduced the little points that appear on the curved edges.

When attaching bias binding to the collar, the pattern instructions say to attach the collar with a 1.5 cm seam allowance, trim down to 0.6 cm and then attach the bias binding. What I don't like about this is that trimming free hand risks an uneven edge on which the bias binding is attached. Let's face it, who's going to measure and mark to make sure the trimming is even? Instead I left the neck edge seam allowance at 1.5 cm, didn't trim, and didn't iron the edge of the binding flat, leaving the ready-pressed fold in the binding as it was. I then lined up the fold in the binding with the stitched seam line on the neckline (which attached the collar) and pinned. This means that the binding does not line up with the edge of the neckline. No problem as you stitch along the ready-pressed fold line in the binding which you can clearly see. I then sewed along the foldline (which sews through the collar seam line immediately underneath), pressed and THEN trimmed. Uneven trimming does not matter now!

Megan's tip is that preparation is the key to the placket. This is so true and I think that even more preparation before you start to sew the placket makes it so much easier. (I did method 2 in the pattern so I don't know if this would apply to method 1).

I have set out at the end of this post the steps that I added to the placket placement.

Trying on of muslin 2

After taking time to perfect the collar and placket construction methods I assumed the rest of the fit would be fine. Wrong! Although I liked the collar, the placket and the front of the top generally, there were major issues with the back. I had to gather the neckline at the back to fit it into the collar. Also the shoulder seams wanted to sit too far down my back rather than the top of my shoulders.

I nearly cried at this point and just left it for a couple of days. I couldn't face making more adjustments to the back. They would be too complicated as they would involve the collar as well. This was when I hit upon the idea of using the bodice from another pattern where the fit is good. My first venture into using and adapting a block pattern!

Muslin 3 – Phoenix from the Ashes

I can't believe I actually did something to salvage the Banksia and pretty quickly too. I decided to make the top from my tried and tested Angela Kane shift dress pattern (see posts from last year here, here and here). The Angela Kane pattern had already been adjusted to fit me so I only had to made a few adjustments (traced onto new pattern pieces) to turn it into a top. I just chopped a bit off the length, made the sides slightly bigger and traced the neckline of the Banksia front (not the back).

I then traced out a new collar pattern from my adjusted pieces. I effectively using the Gertie / Jamie Lau method as mentioned in my posts from last year. I then traced the outline of the Banksia collar as closely as possible. I found it useful to notch the collar pattern piece to match the shoulder seams. This makes attaching the collar so much easier and I wonder why the original pattern didn't have shoulder markings (unless I missed them). I also made an under collar piece 1/8 inch smaller.

When making this muslin I didn't bother with the bias binding on the inside of the collar (which I did on my first two muslins). I just attached the collar and then “under stitched” the collar seam allowance to the neckline of the shirt. This works just as well to give you an idea of what it will look like.

I took my time doing method 2 of the placket and have made a few changes / additions to the (excellent) instructions in the Banksia pattern. I found these small additional steps makes it easier to sew and reduces the risk of the placlet seam allowances peeking out to the right side.

The only problem with using another bodice pattern was that I didn't have sleeves to fit. I looked up a few tutorials and tried to draft my own. I make up a couple of drafts and they were a bit laughable. I decided to abandon the sleeves – baby steps! 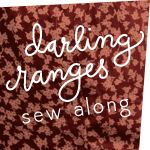 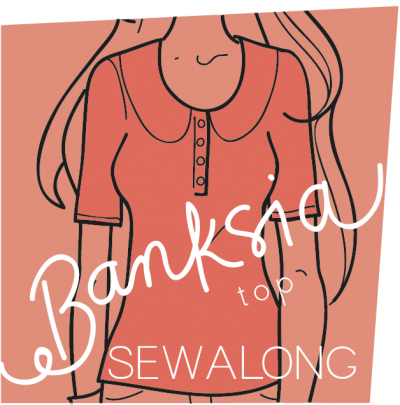